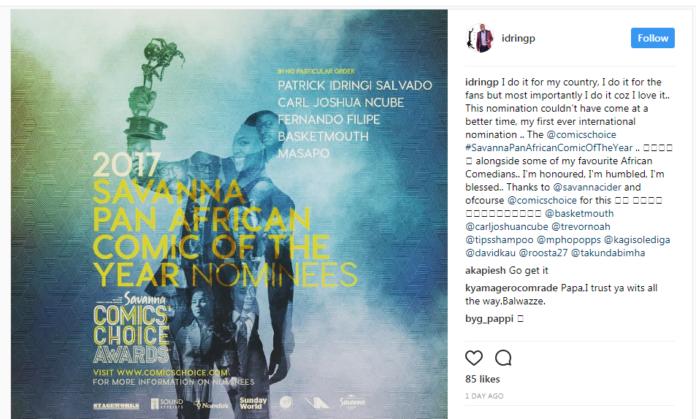 Celebrated local stand-up comedian Patrick ‘Salvador’ Idringi has been nominated in the category of Savanna Pan African Comic Of The Year Award in the Savanna Comic’s Choice Awards 2017.

The newly introduced category, which excludes South Africans, will go to the comedian who has contributed the most to the African comedy industry and the person will be voted for by fellow comedians.

“I do it for my country, I do it for the fans but most importantly I do it coz I love it. This nomination couldn’t have come at a better time, my first ever international nomination,” Salvador posted on his Instagram account.

The awards are part of the vision to open the arms of the local comedy industry to the comedy family on the continent.

Public voting and voting via SMS is open and will close on Friday, August 25, 2017.

The event is scheduled for September 9 at The Lyric Theatre in Gold Reef City, Johannesburg South Africa.