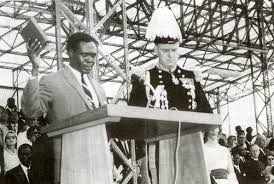 9th October, 2018 Uganda would turn 56 years old and independent save for abnormal events in the country such as a Cabinet Minister for Defense’s recent claim in the National Assembly that there exist occupational forces (militants) from as far as West Africa to be specific Nigeria battering Ugandan citizens with impunity on the streets of Kampala in broad daylight making independence of Uganda a far cry.

At 56 years, independence would mean transparency, self-rule, self-determination, accountability, love for the country (patriotism), free of corruption and exploitation but where is this in Uganda where managers and administrators take government organizations they work for as their own family businesses?

Uganda was the site of several powerful kingdoms notably Buganda and Bunyoro before the arrival of European colonialists in the late 19th century; she became a British protectorate in 1894 with her present borders established in 1926 who managed themselves very well.

Uganda’s approach to independence was unlike that of most other colonial territories where political parties had been organized to force the reluctant white rulers for independence.

There had been demands for greater autonomy, but these were mostly expressed by local nationalists surrounding the then five constituent kingdoms of the Colony. National demands for independence began with the formation of the Uganda National Congress (UNC) in 1952 based on the patterns of the Congress party of India by nationalists such as Ignatius Musazi and Abu Kakyama Mayanja whose small organization never won much support and was quickly suppressed by the British rule. Deep religious divisions had developed, the British liked and supported elites who had largely been converted to Protestantism but the majority of the populations however, were catholic and they were excluded from power by the Protestants.

Ethnic divisions were just as important then as it is presently. Baganda catholic chiefs and educated urban professionals formed Democratic Party (DP) in 1954 and in 1960 Milton Obote formed the Uganda People’s Congress (UPC) by joining Northern Uganda branches of the UNC and representatives from Western Uganda mainly who had been elected to the Legislative Council in 1958. The DP and UPC became the major National parties, each gaining influence by winning the support of local notable personalities with rural ethnic followings in their home areas.

(Note: The same rural and tribal based parties still exist today coupled with selfishness, sectarian tendencies almost in all sectors and institutions.)UPC was dominantly protestant as opposed to Buganda based Democratic Party most of whose members were catholic.

As one of the first generation cadres, I have been evaluating and reflecting on the salient issues in the NRM 10 point program which I vibrantly preached all over the greater Bugisu (now seven districts) in the mid 80s and 90s and realized very serious challenges and questions of the revolution that remain to be answered.

• How do we effectively and thoroughly fight and eliminate the rampant corruption and abuse of office (stealing with impunity), create a vibrant micro-economic environment to match the immensely improved macro-economy?
• How can we participate in the global ORDER, world environment and climate change when a government minister is insisting that plastic bags (buveera) are okay, gainfully increase per capita incomes in a planned time frame and tackle the unprecedented, dangerous graduate/youth unemployment head-on?

• How can the people’s power (constitutional framework) and democratic gains for effective, good governance be actualized and perpetuated at all levels, at all times in the whole country to avoid chaotic regression?
• Can’t government and or the president have the ability and willingness to bend a little and seriously advocate for a serious national dialogue with opposing political forces for peaceful resolutions for it costs less than war?