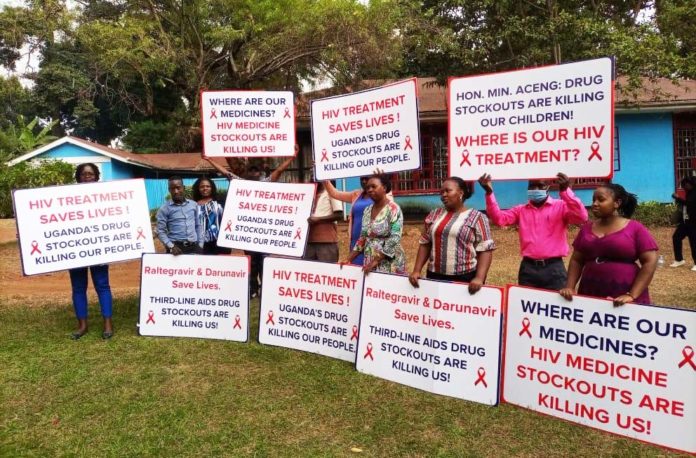 During the lockdown, Livingstone Kazibwe, aged 32, biked several kilometers to different locations every week to deliver anti-retroviral therapy to the doorsteps of People Living with HIV (PLHIV).

Depending on the demand from PLHIV, for instance, from Zzinga island to Bussi island in Wakiso district, Kazibwe drove 14.7 kilometers to not meet some of their clients who were referred to him, but also deliver ARVs to PLHIV referred from other organisations.

After the confirmation of the first case of Covid-19 on March 21, President Yoweri Museveni imposed a total lockdown on March 31, which included a ban on public transport, closing of schools, suspension of church services, and educational institutions among others.

Because of the movement restrictions, a number of people living with HIV could not access health facilities to get their refills or to get treatment meaning, there were interruptions in other related services at the expense of ‘fighting an epidemic.’

For one to travel then, one had to first get a letter from the Resident district commissioners (RDCs), office to grant them a movement permit to pass the heavily manned roadblocks. The roadblocks were operated by law enforcers such as police and army officers.

When Florence Namale (not her real names), a resident of Nansana Masitoowa in Wakiso district, ran out of antiretrovirals, she had to trek six kilometers to the RDC’s office to get a movement permit. Due to the long queue, she had no choice but to leave without getting a permit.

“I inevitably skipped three days without taking my medication. Skipping my medication scared me most than acquiring coronavirus. I was terribly worried about the effect of that, the main one being the drug resistance,” expresses Namale.

According to the executive director of Positive Men’s Union, (POMU), Richard Serunkuuma, the failure to suppress HIV viral loads was one of the greatest challenges that PLHIV experienced during the total lockdown.

Viral load is the amount of virus in someone’s blood. An overwhelming amount of clinical evidence shows viral suppression is the key goal of HIV treatment and to achieve and maintain an undetectable viral load.

Namale sought assistance from a trusted friend who referred her to Livingstone Kazibwe, a program officer working with Coalition for Human Rights Education in Kajjansi.

To support PLHIV during the lockdown, Kazibwe and volunteers rode bicycles and motorcycles to different health facilities to pick ARVs for clients and drop them off at their preferred locations.

“Working in partnership with other community-based organizations, (CBOs), we almost operated in the entire country to deliver ARV drugs to locations where PLHIV lived. Basically, most of the clients we supported were not our clients but members of other CBO’s across the country,” explains Kazibwe.

Besides that, Kazibwe reveals that, because they monitor their clients on a monthly basis, during the lockdown, they knew clients whose refills were due. To effectively deliver the medication, Kazibwe says they had to get the appropriate directions of the clients.

“We had to know the whereabouts of the clients. I was so discreet that someone else could not tell what we were delivering. I personally used a motorbike to deliver ARVs to about 100 PLHIV residing in districts such as Kampala, Wakiso, Mukono, and Mpigi.” He said.

Outcomes from the total lockdown for PLHIV and their community

Stella Kentutsi, CEO for the National Forum of Network of people living with HIV, (NAFOFONA), an umbrella organization of PLWH in Uganda says the only positive outcome of the pandemic is the fact it made a number of people, especially in Karamoja, who did not want to associate with their peers to disclose their status. Adding that, in Moroto, about 50 people willingly disclosed.

On the issue of the community’s reaction to disclose, Kentutsi, says, the numbers were relative because they are many people living with HIV without their knowledge.

“When we supplied food, the number of people, especially in Karamoja, who had been in hiding and dint want to associate with the peers, came out and said, we are also living with HIV. That was a positive gesture because we would wish so many people to come out so that they are supported,” explains Kentutsi.

For instance, with support from the Embassy of Ireland, Kentutsi discloses that they reached about 1300 people living with HIV in Karamoja. With support from UNAIDS, they supplied food to over 1000 PLHIV in Kampala Metropolitan.

Because of the stigma given the fact that some people could not go to health centers, Kentutsi says, peers came in handy and delivered the ARVs to PLHIV. For people who were free to disclose and say they are stuck and needed help, IDI reached a point of using the police patrol vans to support them.

For many PLHIV, survival meant compelled disclosure. By then, the declaration of HIV-positive status accompanied by clear displays of HIV treatment cards became normal.

How CSOs linked PLHIV with doctors.

With the launch of online Helpline services, POMU supported 367 clients with HIV, TB, and COVID-19 information, referral, and advice. Besides that, POMU also connected several Helpline clients with other HIV experts such as Dr. Stephen Watiti and Dr. Marilyn Crawshaw to support and answer their ‘hard’ questions.

“We also supported those due for routine viral load testing with travel documents to make it to the ART clinics. For instance, Robert received his ARVs from TASO in Masaka, but lockdown found him in Luweero district and he could not travel because of inter-district travel restrictions. Though he had missed his treatment for five days, POMU connected him with an expert client who gave him his treatment,” Sserunkuma said.

To reach out to the peers, Kentutsi says: “We had a toll-free line and also created a WhatsApp group both at NAFOFONA and ministry of health level to get in touch with all the partners who were supplying ARVs. So, anybody who didn’t access ARVs, peers would come in handy and deliver.”