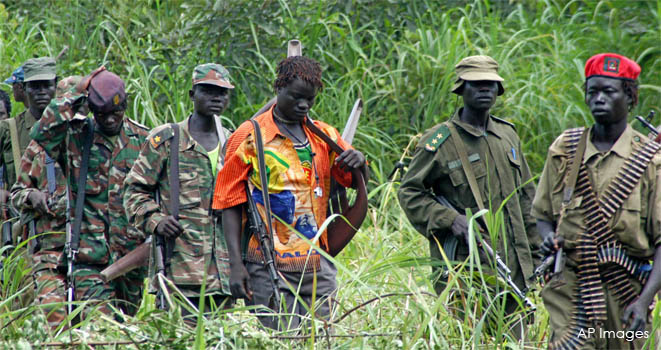 The incidents represent the largest kidnapping by the Ugandan rebel group – headed by notorious warlord Joseph Kony – in recent months in the former French colony, which is also reeling from years of inter-religious bloodshed.

The LRA, known for massacring and mutilating civilians as well as abducting children to serve as fighters and sex slaves, raided a mine near the village of Diya, around 600 km (370 miles) east of the capital Bangui,on Saturday.

He said one person was also killed and a vehicle was burned during the attacks.

News of the kidnappings emerged on Tuesday due to the raids’ isolated location and Central African Republic’s poor communications infrastructure, made worse by violence between Muslims and Christians that has split the former French colony.

Local residents said the gunmen wore uniforms and did not speak French or the national language, Sango.

“Those kidnapped went to sell their products at the market in Diya and were kidnapped in order to carry what the LRA had looted in the village,” said local humanitarian worker Gaston Gazale.

After a military crackdown by Kampala, the LRA left Uganda about a decade ago and its fighters have roamed across lawless parts of Democratic Republic of Congo, South Sudan and Central African Republic ever since.

The United States has backed Ugandan-led regional military efforts to defeat the rebels, who are now believed to number just several hundred battle-tested fighters in addition to Kony and other leaders wanted by the International Criminal Court.

However, despite some progress, notably the surrender of senior commander Dominic Ongwen last year, the LRA continues its attacks on civilians.