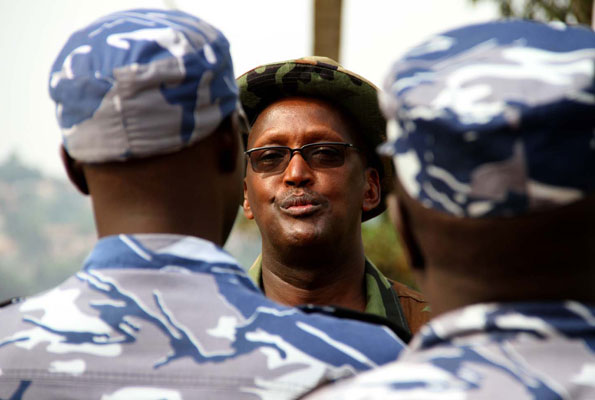 Armed with a list of the suspected gangsters and escorted by a small security detail, the former spymaster for over 6 hours carried out a recon in the areas of Nansana, Nakulabye, Makerere Kivulu, Bakuli, Kisenyi, Mukono and Busabala in Makindye division.

On his first day in office, Lt Gen Tumukunde vowed to crack a whip against the Kifeesi Criminal gang that continues to torment the people.

The tough talking Lt General asked Kifeesi criminals to try their operations elsewhere but in Uganda and definitely not when he is the minister for security..

Observers say, following the Uganda Police’s admission of using these criminal gangs as informants like we reported, Gen. Tumukunde’s move is likely to cause a rift with Gen Kale Kayihura’s men.

The Kifeesi gang is known to operate in groups of not less than 15 people. The crew besieges a carefully scouted area on the streets and in the outskirts of trading centres and caries out daring robberies that don’t last more than 10 minutes.

The Kifeesi crew is bred from Katwe – Kinyoro, with their main base at Musoke zone. The gang, commanded by a one Face (Nickname arising from the failure by the crew member to know his face) has been in existence since 2010.

While the criminal gang is well known for petty theft, they also have an armed robberies wing, various cases of armed robberies and murder cases have been registered against them. His gang was suspected to have been responsible for raiding Mpala Police Station in 2013.

The group is well known especially in the city center and Entebbe Road and on many occasions, traders will smell trouble a few minutes to the attack and alarms are usually raised to warn that the gang members are in the area.

On most occasions, the traders will scream “Bakifeesi baabo” literally meaning “the Kifeesi crew members are here”.

While the crew is said to comprise of mature energetic men, the ones who carry out the petty theft operations are mainly young boys between 13 and 20 years. Their trademark dress code while in an operation is long sleeved shirts with the left sleeve folded.

Unlike other petty thieves, the Kifeesi crew moves in cars and boda boda. In an ideal operation, the group members are dropped off to their venue of attack in a super custom motor vehicle or coasters.

The vehicles later pick them up when the operation has been completed from an area agreed upon during the planning of the attacks.