The politician most sure of his job in Uganda today is President Yoweri Museveni, who was announced winner of the presidential elections of February 18, 2016.

For the others elected during the elections, it is ‘not yet Uhuru’ as some battle court cases, while others like the Speaker Rebecca Alitwala Kadaga and her Deputy Jacob L’Okori Oulanyah are jostling for the prestigious office at Parliament. And in between Mr Oulanyah has a date with court, to determine whether he won the Omoro County elections against Forum for Democratic Change (FDC) candidate Simon Toolit Akecha.

But coming down the political rung a little bit, after yesterday’s cabinet meeting all Ministers have become jobless, at least for a few days (for the lucky ones) while for those who may not bounce back to their prestigious jobs, there is still a future to live and, God willing, a possibility to return to Cabinet. It has happened before as the Third Deputy Prime Minister and Minister for East African Affairs Al Hajji Kirunda Kivejinja, Information Minister Maj. Gen Jim Muhwezi and State Minister for Trade Michael Werikhe can attest.

That said however, in the last Cabinet you have been about 70 men and women providing services for about 35 million people at the President Yoweri Museveni’s pleasure and naturally some of you have done reasonably well and performed to his and the citizens’ expectations, while others have floundered and in the process negatively impacted service delivery and consequently the citizens’ aspirations. 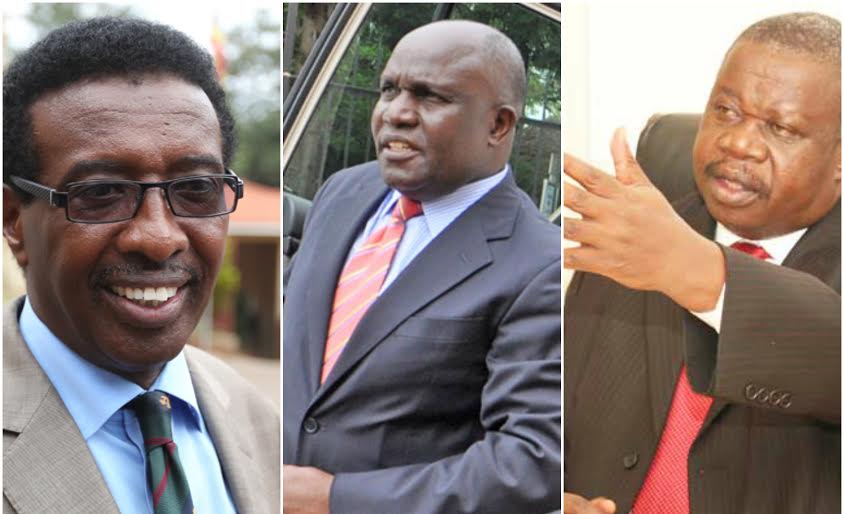 Likely to bounce back due to historical ties.

Needless to mention, there are several positives that have been achieved by the Ministers who have served in government since 2011 and for that they deserve applause for a job well done.

Indeed, the job of Minister of the Republic of Uganda carries with it a lot responsibility but it is also one of the most rewarding; a free chauffeur-driven car, house/allowance, fully-paid-for foreign travel and medical treatment for self and immediate family (both local and foreign), free airtime… the list is long. Unfortunately, even given the huge perks some Ministers still found that political oversight role challenging and failed to leave an impressive audit trail, in the process damaging the image of government in the eyes of the tax payer, who laps after the last drop of sweat to make sure they live in comfort in order to perform better!

The biggest goof in the last cabinet was in the Prime Minister’s Office then under John Patrick Amama Mbabazi and in the Ministry of Public Service under Henry Muganwa Kajura, where hundreds of billions of shillings were swindled and to date there is little to show that punitive action is being taken against the political heads in those ministries. Similarly, the Ministry of Works and Transport under Eng James Abraham Byandala came under the spotlight after Shs24 billion was paid out to some dubious company ostensibly for the construction of the Mukono-Katosi Road.

Then recently came the news that the chemotherapy machine for cancer treatment at the Mulago National Referral Hospital had broken down, putting the line Minister Dr. Elioda Tumwesigye in an uncomfortable spot of bother. This was to be followed by the breakdown of another machine, that for radiotherapy. As if that wasn’t enough from the health docket, State Minister for general duties in the Ministry of Health Chris Baryomunsi threw when he said that with or without the cancer machine breaking down, cancer patients would die.

Not to be outdone, the Ministry for Kampala under Frank Kajiji Tumwebaze weighed in on the political issues at City Hall and had Kampala Lord Mayor Erias Lukwago ‘impeached’ following recommendations from a Commission chaired by Justice Catherine Bamugemereire. The ‘impeachment’ of Lukwago tested the dictates of law, with justices Yasin Nyanzi and Justice Lydia Mugambe pronouncing themselves on the matter in favour of Lukwago, not until Deputy Chief Justice Steven Kavuma, sitting as a ‘single judge’ ‘offered direction’ by ordering Lukwago out of office. Up to today, the issue of the Lord Mayor is as contentious as it was three years ago.

NAMES UGANDANS ARE LIKELY TO HEAR LESS ABOUT

Of course we are sure First Lady and Minister for Karamoja Affairs Mrs Janet Kataha Museveni dropped in the proverbial ‘political towel’ last year and might not bounce back to Cabinet, unless the appointing authority, who also happens to be her husband, thinks otherwise.

Others who are likely not to bounce back include those who did not contest for Parliamentary seats and those who lost in the National Resistance Movement (NRM) primaries.

In the first group above, save for Prime Minister Dr Ruhakana Rugunda, nine Ministers: Tress Bucyanayandi, John Nasasira, Philemon Mateke, Al Hajji Ali Kirunda Kivejinja, Shem Bageine, Maria Mutagamba, Tarsis Kabwegyere, Rose Najjemba and Prof Sunday Stevens Tickodri Togboa are not likely to come back in the next cabinet. And the reason for not coming back is that they didn’t contest.

However, for some of those on the second list who lost in the primaries and sought judicial intervention, there is still a reprieve from the judiciary, which is deploying 26 judges of the High Court to hear petitions between May and June.

On the positive side those that entered government on technical grounds like Fred Jachan Omach, Irene Muloni, Prof. Sunday Stevens Tickodri Togboa and Mr Ruhindi are likely to retain their seat.

Nevertheless, it isn’t all lost for those that won’t make it but certainly for some like Generals Otafiire, Muhwezi, Dr. Kiyonga are likely to be brought back on historical ties while for people like Daudi Migereko, information gathered so far indicate that the man from Bugembe is bound to bounce back in cabinet to check the influence of Mama Kamuli.