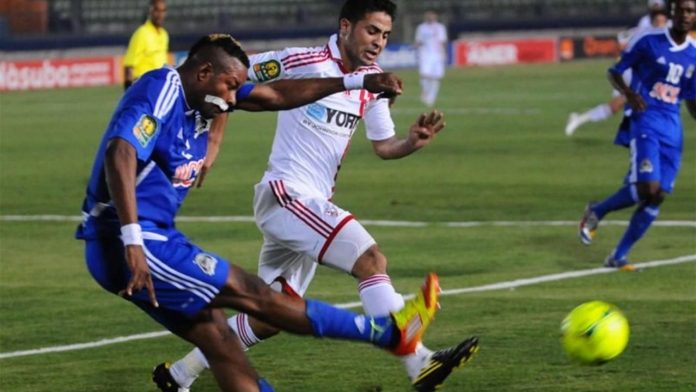 Between the two sides, they have won ten CAF Champions League titles divided to five each, a number that’s only exceeded by record eight time champions Al Ahly of Egypt. This makes it a “Clash of Titans” when DR Congo giants TP Mazembe welcomes Egyptian counterparts Zamalek, in the opening match day of the 2019/20 Total CAF Champions League Group A at the TP Mazembe Stadium in Lubumbashi..

“Les Corbeaux” as Mazembe are fondly called are eyeing their sixth title in the Holy Grail of African club football; same as their opponents, the “White Knights” as Zamalek are christened. Mazembe last won the prestigious premier continental club championship in 2015, while Zamalek, last season’s CAF Confederation Cup winners tasted glory in the CAF Champions League back in 2002.

It’s going to be the seventh CAF match between both giants, with all six previous meetings being in the CAF Champions League. After Zamalek’s semifinal 3-1 (1-1 and 2-0) aggregate win on their way to the 2002 title, the two sides met four times in the group stage of 2012 and 2014, with Mazembe winning three of them and managing one draw. Overall Mazembe have won three times compared to Zamalek’s lone victory, whereas two other games ended in stalemates. Les Corbeaux scored six goals against four for the White Knights.

Led by their former captain Pamphile Mihayo, who tasted the Champions League glory twice as captain (in 2009 and 2010), Mazembe is – as always known – a blend of African talents, including players from DR Congo, Cote d’Ivoire, Mali, Zambia, Uganda, Ghana, Congo, Tanzania and Benin.

Meanwhile Zamalek banks on their North African mixture which includes two Tunisians and as many Moroccans besides their regular Egyptian internationals. They enter this season’s group stage guided by an experienced coach on the African football landscape in ex-Uganda and Orlando Pirates Serbian Milutin “Micho” Sredojevic.

Angola’s Primeiro de Agosto hosts Zambia’s Zesco United in the other Group A match in Luanda, also on Saturday.