The gloves are off, Lebanese owned Africell has vowed they, won’t bow down to their Indian backed competitor  …  they are refusing to give up on the alleged issue concerning fibre optic diversion by Airtel Uganda engineers.

Africell CEO Mohammad Ghaddar insists Airtel has not allowed fair play in the market in his latest statement.  They claim that Airtel Uganda was “stealing” their Optic fiber and that they’d discovered much of their fiber cable in areas like Entebbe, Bwaise, Bugolobi, 6th street in Kampala, Jinja and some parts of Northern Uganda intentionally diverted by Airtel to their own network.

This matter has also been brought to the attention of the Regulator, Uganda Communications Commission (UCC). Africell insist whole war is over Airtel using for unfair practices against the growing brands like Africell.

In retaliation, Airtel ran to the Magistrate Court of Nakawa and secured an Interim Order suspending any further search of their premises and or damage of either firm’s fibre until court pronounces itself on Airtel’s main application.

For those who missed it … Airtel released a strong worded statement arguing they wanted to clarify in the most unequivocal terms that the allegations levied by Africell Uganda owned by Lintel, being unfounded, full of falsehoods intended to injure their reputation.

It’s interesting …  Africell received the court orders and fired back in a more detailed statement that serves as their last stand on the issue until this matter is settled by the law. 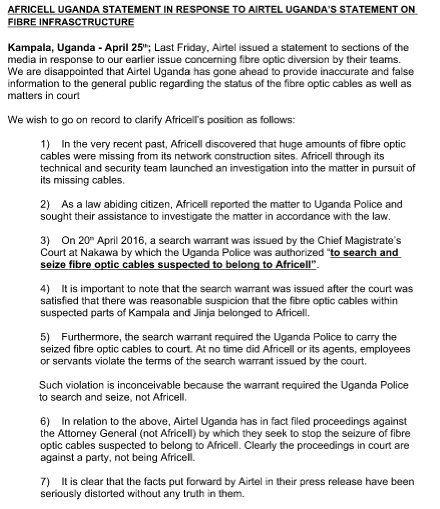 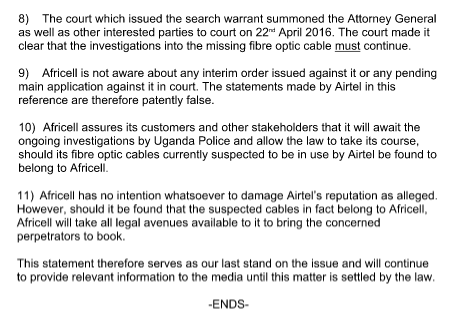 Who owns the data market?

The saturation of the voice market has pressured the Telecoms to diversify into other sources of revenues in order to stay profitable in a highly competitive industry. Services such as mobile money and relatively fast data connection services have been birthed because of this saturation.

This has been a bloody fight indeed. Africell continues to maintain market leadership with its earlier market entry advantage and superior service, MTN uses its numbers but Airtel are already eating some of its lunch with more or less same competitive service offering.

Nevertheless industry officials have noted that cut-throat competition that forced players to lower tariffs to woo subscribers was wearing margins so thin there was a need for mergers for some companies to remain viable.