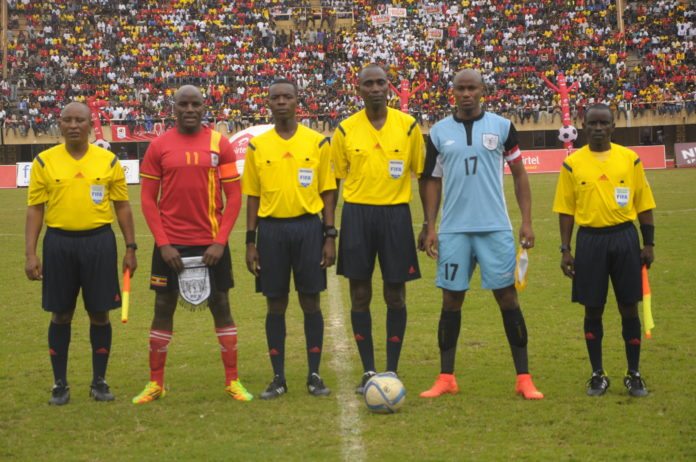 Uganda defeated Botswana 2-0 in their opening match of Group D of the Africa Cup of Nations 2017 qualifiers at the Mandela National Stadium in Kampala on Saturday, June 13th 2015. A goal each in the second half from Geoffrey Massa and now injured Brian Umony were enough to give Uganda the victory after having dominated the entire match.

A year on, Uganda go into the return leg as underdogs following their poor away record and captain Massa this week urged his teammates to be prepared for a fierce battle. “We need to work hard because the only way to achieve good results is through hard work. So we can’t just rely on the fact that we have good players.

“All we need to do is to focus on the game and give a five star-performance and try to be victorious on Saturday,”  South Africa based Massa said. Indeed, Uganda produced a poor show to draw Burkina Faso in their group last match in March. Yet that was just about the only occasion they played at something close to their collective possession best during the current campaign.

Micho’s team had in a year largely disappointed in the preceding three matches, needing three fluke goals to force a win home against Botswana and 1-0 away to Comoros.

The Cranes however served their worst for the 0-0 stalemate against the Burkinabe, when they had goalkeeper Denis Onyango’s heroics to thank after a horror show.

That disjointed display was however quickly remember as Uganda were thumped 2-0 by Zimbabwe on Tuesday this week in an international friendly  in Harare thanks to a scintillating first-half onslaught.

The team’s star players Massa, Emma Okwi, Kizito Luwaga and Joseph Ochaya, all came out with low ratings, and the long suffering Uganda fans will undoubtedly be anticipating more of the same as the Cranes play in Francistown where rivals Burkina Faso fell 1-0 and Comoros where humbled 2-1.

As well as doing quite well after four games, Uganda are second below Burkina Faso in Group D on seven points because of a better head-to-head record.

In truth, perennial underachievers Uganda have little choice but to get a draw which would keep them in contention for a ticket to next year’s Afcon finals.

It would be a fitting achievement for a new generation of locally based stars like Joseph Ochaya and Eria Ssekisambu which has the potential to shape into perhaps the most exciting team in decades.  An appearance at the continent’s premier football tournament could provide some invaluable experience for a team effectively in transition.

The Cranes could however still find themselves with a mountain to climb even if the hold Botswana on Saturday should Burkina Faso also win away to Comoros. Such an outcome would leave Uganda needing to avoid defeat in their final match home to the South Africans and hope for a reverse in the other group game.

In short, Uganda Cranes need maximum points against Botswana who and Comoros in September to guarantee a place in Gabon.

German based Melvyn Lorenzen will not appear in the qualifier against Botswana as he has turned down an opportunity to don the Cranes jersey in a competitive game “We shall definitely miss the extra impetus he (Lorenzen) would bring to the team as was seen in the friendly match against Zimbabwe but for now we shall concentrate on the available players to accomplish our mission,” said Micho.

Fufa President Eng. Moses Magogo has also been with the team since Tuesday for moral support as the leader of football in the country.

South Africa match official Victor Miguel de Freitas Gomes will be the center referee, assisted by Zakhele Thusi Siwela and Mothibidi Stevens Khumalo as the first and second assistant respectively while Kulasande Qongqo will be the fourth official. The four will be joined by An Yan Lim Kee Chong as the match commissioner from Mauritius.

Standings with 2 games to go in 2017 Afcon qualifiers