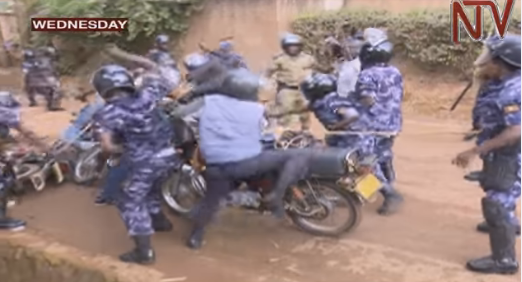 A boda boda cyclist Ronald Muhereza has filed a lawsuit against Uganda Police and is seeking millions in compensation after he says he was tortured for supporting President Museveni’s four time presidential candidate opponent Dr. Kizza Besigye.

Muhereza claimed he is battling pain accrued from beatings of security personnel in police uniform and civilian clothes who on Wednesday were caught on camera clobbering Dr Besigye’s supporters and boda boda cyclists along Entebbe Road as some followed him or stood by the road to cheer him.

Even on Tuesday, Besigye who is facing treason charges, was returning to his home in Kasangati after he was granted bail by the High Court. The following day he was travelling to the FDC headquarters in Najjanankumbi, Kampala. 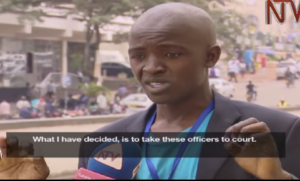 His lawyers Rwakafuuzi and Company Advocates say the torture constituted a ‘gross violation’ of their client’s human rights and that the Uganda police and Attorney General should be held responsible for the actions of state employees.

In a statement issued on Thursday morning, Uganda Law Society, which brings together all practicing advocates across the country, said the acts of police brutality are unacceptable in a free and democratic society and asks police to refrain from them.

But Police chief Gen Kale Kayihura reacted during an afternoon a press conference saying the crowds hurled insults and stones at police, prompting the beating. He claimed that the use of batons is now the recommended standard of operation since the force has always been criticised for using teargas and rubber bullets.