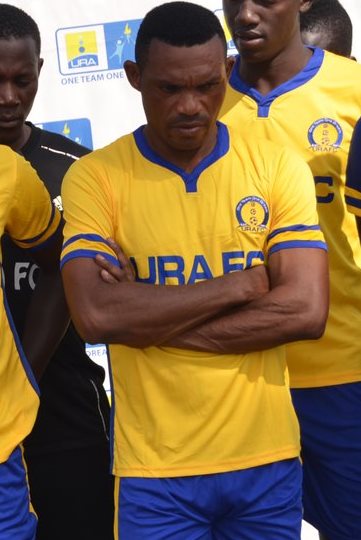 There’s less than one month to go in the transfer window and teams are desperate to bolster their squad and find quality additions for the new season.

And here is one that could interest Uganda Revenue Authority fans.

Labama ‘Kamana’ Bokota has departed Rwandan Premier League side AS Muhanga after just six months to sign a one-year deal Uganda’s URA FC unveiled on Thursday at the club’s training base in Gayaza.

The ex Rwanda international veteran striker who was born in DR Congo has never been a regular goalscorer but offers pace, power and good link-up play in the final third.

Kamana in his mid-30s played for Amavubi between 2007 and 2010, scoring nine goals from 20 international appearances.

At club level, he has appeared for Conglese side AS Vita Club (2006-2008) before crossing to Rwanda to join Rayon Sports (2008-2009), APR FC in 2010, FC Les Stars for the season 2011 before returning to his homeland to where he signed for DC Motema Pembe in the same year. The bulky striker again traversed  In August 2011, he signed a two-year contract with Rayon Sport for a second stint with the Rwandan club.

On  August 8, 2012, Amavubi striker Bokota Labama joined Kiyovu Sports on a one-year deal and disappeared off the scene until early this year when he played for Muhanga.