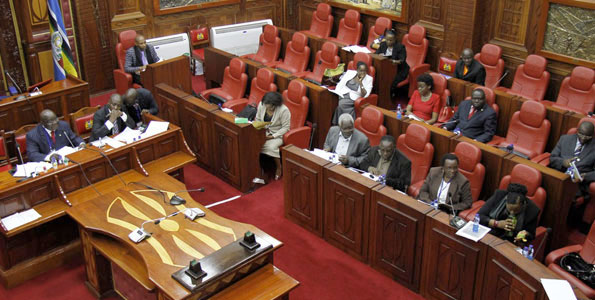 Kiswahili is already the national language of Kenya and Tanzania and is widely spoken in eastern Uganda, Burundi, parts of Rwanda and eastern DR Congo.

Attempts to expand its usage in Uganda have always hit a snag with its detractors arguing that it is a “violent” language associated with the past armies that terrorised the civil population in the 1970s and ‘80s.

Now media reports in Tanzania say that Eala legislators on Thursday agreed that the change was “long overdue” as the language “played a big role in uniting the people” of East Africa.

The motion to recognise Kiswahili as one of the official languages of the Community was tabled by three legislators being Mr Abdullah Mwinyi and Ms Shy-Rose Bhanji, both from Tanzania and Mr Abubakar Zein from Kenya and was supported by counterparts from Rwanda and Burundi as the legislators from Uganda opposed before giving up after a heated debate.

The next stage is that the EAC treaty will have to be amended.

Pressure is mounting and intensive lobbying is already underway to have the issue brought up before the Extra-ordinary Summit of the regional leaders slated for Dar es Salaam early next month.

Amongst all the other East African countries, Uganda lags behind in speaking, teaching and understanding proper Kiswahili, a fact that may put it at great disadvantage.

Kiswahili remains a contentious language in Uganda. The matter has not been helped over the years partly due to lack of a coherent government policy on language development with the position of Kiswahili remaining ambiguous. It is primarily used in the armed forces and was in 2005 elevated to the position of official language alongside English.