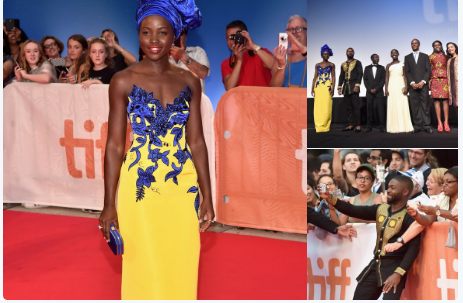 It was all pomp and glamour as the film of a Ugandan chess prodigy has premiered at the 41st Toronto International Film Festival.

The uplifting drama follows Phiona Mutesi who becomes becomes passionate about chess despite of her background.

“It’s a life-affirming African story and as someone of African descent, we don’t see enough of that I believe in cinema, in the press as well so I’m very proud to see a story like this made by Disney as well,” said Oyelowo

“I learned a lot about motherhood. I’m not a mother and yet I had to play a mother and I learned what it takes…. a bit about what it takes to provide for your family and to be concerned about so many people’s well-being. It’s almost like your heart is dislocated and running around and just feeling the fear, inhabiting the fear of a mother letting her chicks out every day to survive,” said Nyong’o.

Based on the novel, The Queen of Katwe, the Disney film explores the story on Mutesi who is said to have overcome challenges through playing this skillful game.

The movie which has largely been shot in Uganda has been directed by Mira Nair a Ugandan filmmaker based in the US.

The film will be released on September 23.