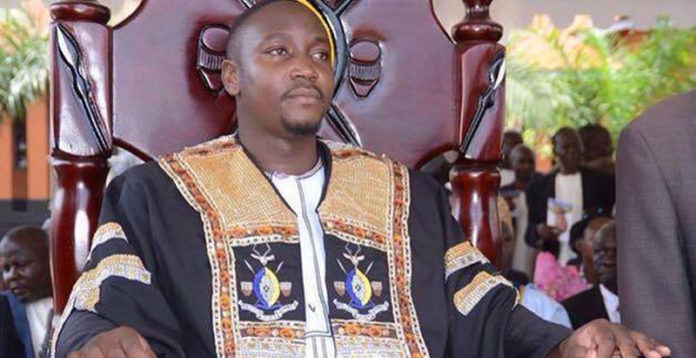 President Yoweri Museveni in a new reshuffle of ambassadors appointed the King of Busoga, William Wilberforce Gabula as his ambassador Special Duties.

However, the appointment isn’t going down well with some of the elders of Busoga. The only candidate in last year’s presidential race, Maureen Kyalya Waluube has threatened to drag the King to court if he takes up the appointment.

Kyalya says that Kyabazingaship is a job and Gabula has a five year contract with the people of Busoga.

“I am leading the legal team to challenge Gabula in Court for frustrating our contract after frustrating our sitting Kyabazinga and overthrowing him. You can’t serve two masters at a go. Gabula must resign before he becomes Museveni’s watchdog. Gabula must resign if he takes the appointment,” Kyalya says in a statement posted Friday on social media.

Adding “If he accepts he must resign. I too will undress as Kadaga threatened us to enthrone him with force. So many friends I worked with died to clear his way. Their deaths cannot be in vain. I will die failing but trying to restore the pride and status of Busoga. His job is lower than the job I had so what job should I do, clean toilets at Rwakitura? Give me a break”.

Former Makerere University lecturer Charles Fred Oweyegha Afunaduula, one of the elders in Busoga is of the same view like Kyalya.

“Is the demeaning of the Basoga continuing? Obote ensured the Kyabazinga of Busoga, Sir William Wilberforce Kadhumbula Gabula Nadiope, was not only the Vice President of his Party, Uganda Peoples’ Congress, but also, by compromise, Vice President of Uganda, as he made sure the Kabaka of Buganda,  Edward Mutesa, became the President of Uganda, thereby involving the two in politics at the centre. So when there was political disharmony at the centre, the Kabaka of Buganda found himself in exile in England while the Kyabazinga of Busoga found himself in prison.”

Mr Afunaduula says that by being involved in the murky politics at the centre the two men were reduced to nothingness as their areas of influence and glory disintegrated when the UPC government endorsed the removal of Kingdoms. He says now President Museveni has decided to appoint the Kyabazinga of Busoga, Gabula Nadiope Ambassador with Special Duties in his Office, President’s Office, it is another demeaning act because Kyabazinga whom many Basoga regard as a king and a uniting factor, has been giving new hope to the Basoga whom politicians at the centre have been using for their political gain.

”Clearly the act by the poresident reduces the stature of the Kyabazinga and makes him one of the workers in his office just as he himself (Museveni) says he is not a worker or servant of Ugandans. Will the Basoga agree that their Kyabazinga becomes a worker in Museveni’s office, which is a landmine of political activity? Is Museveni’s act of appointing Gabula an ambassador a message to Ugandans that it is he who makes and unmakes kings; some kind of king of kings? Wasn’t the constitutional machination against kings and the continuing treatment of Mumbere as a non-king enough signals as to who is the king? Well, the unexpected always happens!”

However, the president of journalists at Parliament, Isaac Imaka, who also hails from Busoga disagrees with the two elders.

The appointment of William Gabula Ambassador Special Duties/Diplomacy is a very strategic move for Busoga. We appreciate it and we shall take it.

Responding to him, senior Constitutional lawyer and Makerere University law don, Peter Walubiri says the king can still put his Masters Degree to use without necessarily occupying a public office.

“You do not have to necessarily use a Masters’] degree in government public service. That is too narrow an approach. The Kyabazinga need not report to directors and under-sectaries in the public service to use his degree. As a cultural leader of four million people largely afflicted by poverty the best he can do is to mobilise and guide his people to improve their economic status and set an example for the rest of the country”.

Adding “Politically an ambassador is subject to sectarian politics. Indeed the Kyabazinga may even come under challenge if he accepts to submit his higher office to this partisan office,” he advises.