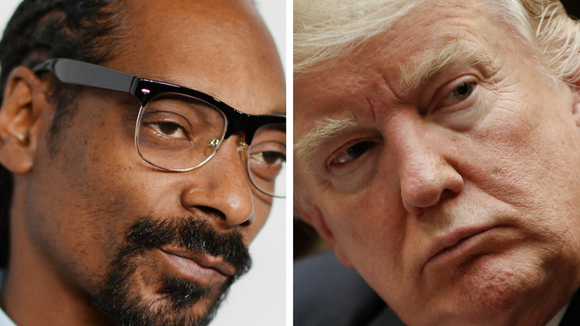 Snoop Dogg’s new “Lavender” music video features a world of clowns, and one is clearly a President Trump parody.

In one climactic moment, Snoop Dogg aims a toy gun at that clown — “Ronald Klump” — and pulls the trigger. Glitter and a banner reading “Bang!” pop out.

Trump weighed in on that scene Wednesday morning, tweeting, “Can you imagine what the outcry would be if @SnoopDogg, failing career and all, had aimed and fired the gun at President Obama? Jail time!”

With the video’s release this week, Snoop Dogg told Billboard that he wasn’t looking for a response from Trump or anyone else with that particular scene.

“I don’t ever expect or look for a reaction. I just put it out because I feel like it’s something that’s missing. Anytime I drop something, I’m trying to fill in a void,” he told the outlet. “I feel like it’s a lot of people making cool records, having fun, partying, but nobody’s dealing with the real issue with this … clown as president.”

Trump and Snoop Dogg actually have a bit of a history together. The rapper appeared on season six of “The Apprentice,” in which the winning contestants got to create a song with Snoop Dogg.

And Snoop was on hand for the Comedy Central roast of Trump, which aired back in 2011, after Trump publicly floated the idea of running for president.

“Now, Donald say he wants to run for president and move on into the White House,” Snoop Dogg said, as Trump grinned. “Why not? It wouldn’t be the first time he pushed a black family out of their home.”