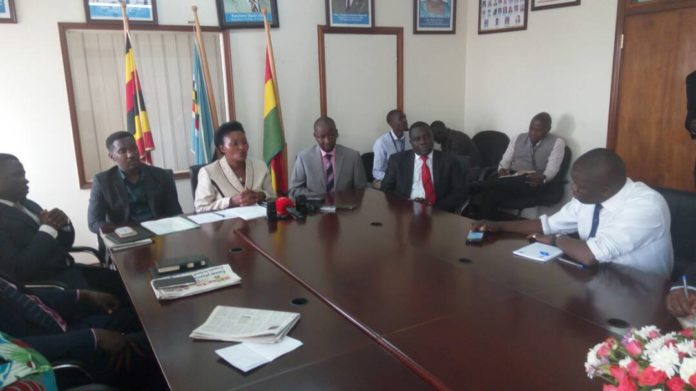 Kasese Woman MP Winfred Kiiza has announced plans by the Opposition MPs to traverse the country, in a sensitization drive on the Constitutional Amendment Bill 2017.

Addressing journalists at Parliament this morning, Kiiza, who also doubles as Leader of Opposition, called on Ugandans to put their MPs on pressure to ensure the bill is kicked out of Parliament.

If passed in its current form, the Bill will give Government powers to compulsorily take over land for establishment of public infrastructure projects, to allow works to go on, as the owner of the land battles with government in court.

“The law isn’t in good faith and is meant to dehumanize Ugandans because they are going to deprive Ugandans of their right to property,” she said.

The Kasese Woman protested Government’s justification to take over land for public development, revealing that the same Government is chocking on debts after failing to compensate people who willingly handed over their land.

The Opposition highlighted the land in Naguru and Shimoni where Government displaced a school and residents to construct affordable housing units and a first class hotel, but said both projects have never seen light of the day.

Further, she warned the Executive against the amendments on land, saying it is a ploy geared towards stripping courts of their powers.

“This is going to make harder for courts because Government intends to place money in court, for court to pass over to the owner. This is taking away the powers of courts. Courts aren’t supposed to be administrative units,” Kiiza said.

According to the Opposition, the compulsory land acquisition will make corruption ‘very normal’ because the country will be at the mercy of the Government Valuer.

Responding to questions on how the Opposition will fight to see the bill is killed, despite the few numbers in the House, the Opposition Leader answered: “It doesn’t matter how many you are, but what you are talking about. We may be few, but talking about a matter that is so dear and has entered deep to the bone marrow of Ugandans. Nobody is going to look about numbers.”

The opposition group revealed that they intend to visit all the 21 subregions in Uganda, with the sensitization gatherings kicking off in Masaka, Wakiso and Kampala.

On how the Opposition intends to solve the case of engaging in running battles with police over the ‘illegal gatherings’, Kiiza said that the Police has already been informed.

As a result, she also warned the Force against indulging in such acts, saying it would be illegal to stop MPs from carrying out their legislative duties in their constituencies.

“It should be in the intention of Police not to interfere instead of dealing with Ugandans after their land is taken. If Police is going to stop one arm of Government from doing their work, it will be unfortunate for it to be dragged into the matter,” Kiiza observed.