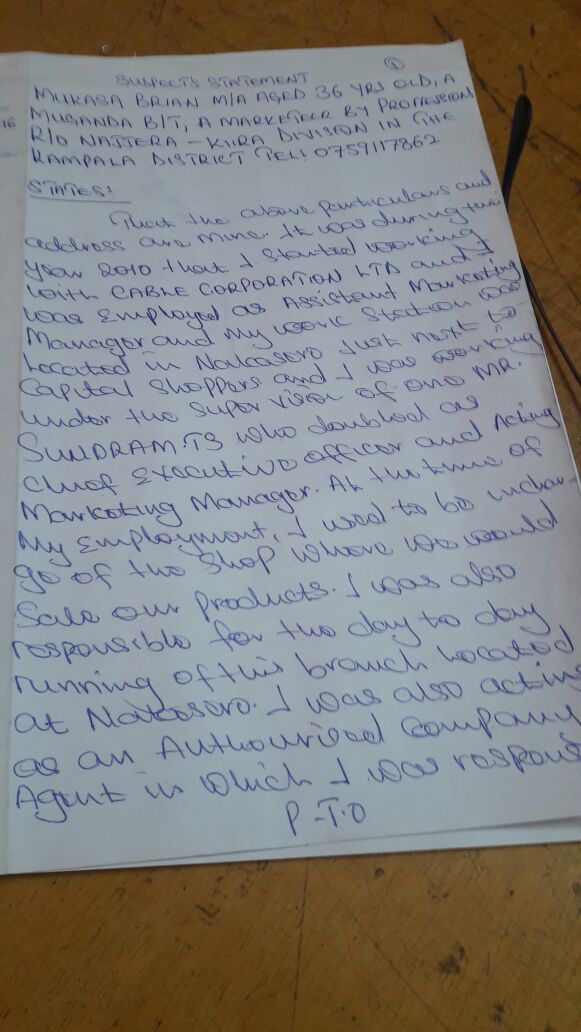 Government is reportedly losing anywhere between five and six million US dollars annually through multi-faceted scams including among others, under-declarations made by the Mehta Group while purchasing different raw materials, mostly copper and aluminum for their cable manufacturing industry, a source has said.

According to the source, the Mehta Group, prominent for the manufacture of sugar but which also has interests in various businesses including the manufacture of electric cables under the Lugazi-based Cable Corporation Limited (CCL), is engaged in a conspiracy with different top bureaucrats from among other agencies, the Uganda Revenue Authority (URA), the Uganda Electricity Transmission Company Limited (UETCL), Umeme Limited and officers of the Police Criminal Investigations and Intelligence Directorate (CIID), to defraud the government of the billions by making false declarations.

The source, speaking on condition of anonymity, said the booty accruing from the scams, which is estimated in millions of dollars, is then expressly forwarded in cash, to some of the owners of CCL in India by proxies including one Brian Mukasa, then an Assistant Marketing Manager based in Nakasero, opposite the premises of former Capital Shoppers.

‘Copper is being sold based on London Metal Exchange (LME) prices with 5-10 per cent premium…but Cable Corporation buys at 40 per cent premium…which can be proved by incoming custom bills. It is mainly bought through Indian export merchants who give the balance in cash to Cable Corporation owners in India. This way Cable Corporation is able to show low profits hence less tax to be paid to government,’ the source told the Eagle Online, naming the CCL officials involved in the scams as Director Hemnabh Khatau, the Chief Executive Officer (CEO)/Resident Director one TS Sundaram, and Chief Finance Officer (CFO), a one Pandeya.

Further, the source said: ‘this racket is mainly involved in copper and aluminum buying whose cost is huge…may be around 5-6 million USD every year. In 2016 they did huge false invoicing more than Shs1billion ….which was done to various government and private customers like Civil Aviation (Authority) …etc’.

According to the source, in October 2016 he exposed a big scam involving over Shs1 billion which ultimately cost him his job and subsequent deportation to India after 7 days in February this year.

‘In October 2016 I exposed a big illegal racket of around Shs1.3 billion and even lodged the complaint with CID…but later on found that all old high level officials were involved and this racket was going on for decades. Ultimately I was forced to close the case with CID and asked not to explore it further; this racket involved false billing, fake production and fake purchases,’ the source said.

Further, the source said: ‘The CID report contains all names, amounts and even officials’ names involved from UMEME, UETCL etc…This CID report could be the main evidence and basis of all investigations then auditing of Mehta Group by independent Auditors’.

Also, according to the source, part of the scam involves the expansion of the factory that was, for purposes of evading tax, allegedly quoted at US$1 million yet in actual circumstances the works are estimated at about US$400. 000.

‘Bank loans are being taken to show expansions and then various machines are being purchased at high prices and difference of price taken under the table. Even these customers do not know that these false invoices were raised which is being done to fool URA,’ the source said.

The source also disclosed that all the copper, aluminum and even machinery which is being bought is exempted from custom duty.

Contacted SC Sharma, the Mehta Group Africa Director referred the EagleOnline to his colleague, Hemnabh Khatau, a Director based in Uganda.

“There is absolutely no basis in that allegation. We are regularly audited by URA and I know the source of that story; those are disgruntled former employees,” Mr. Khatau said on phone.

Meanwhile, efforts to speak to Brian Mukasa, the former Cable Corporation marketing official who allegedly disbursed the money accruing from the said fraudulent copper and aluminum deals, were futile by press time.

However, in a statement by Mr. Mukasa and recorded by Criminal Investigations Directorate (CID) officer, Detective Constable No. 40663 M. Mukoza, the former implicated Umeme officials including the Procurement Officer, one ‘Mr. Amatos’, for receiving money in the form of bribes.

In his statement Mr. Mukasa also says that the company would spend about Shs1 billion in bribes a year, and that he was a poster-boy linked to UECDL and UETCL officials including ‘Hillary, James and Eddy and Doreen’. 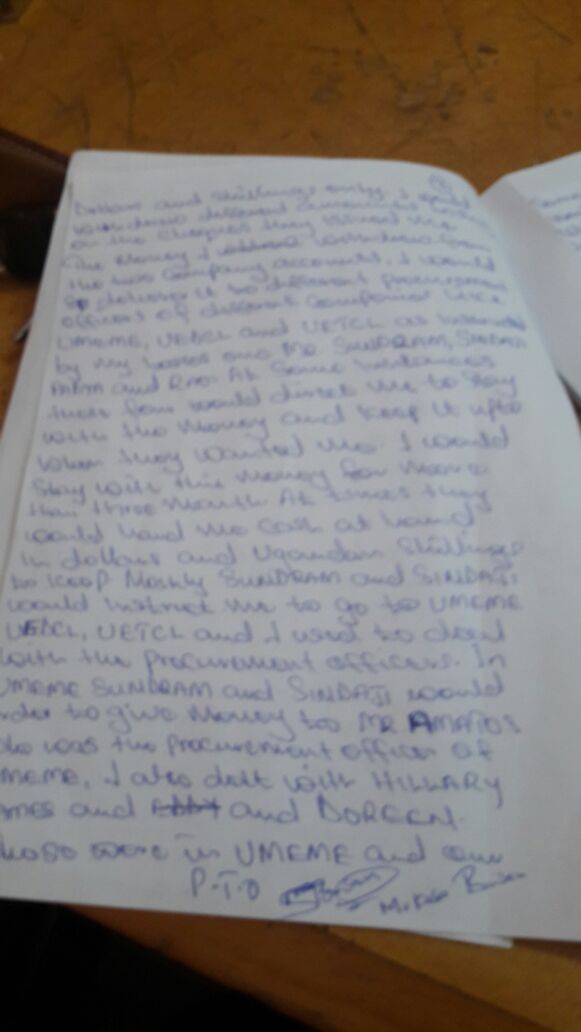 ‘This happened on several times from 2011-2016. For UECDL and UECTL I used to give the money to Mr. Sundram and he would give it to the procurement officers of the companies. 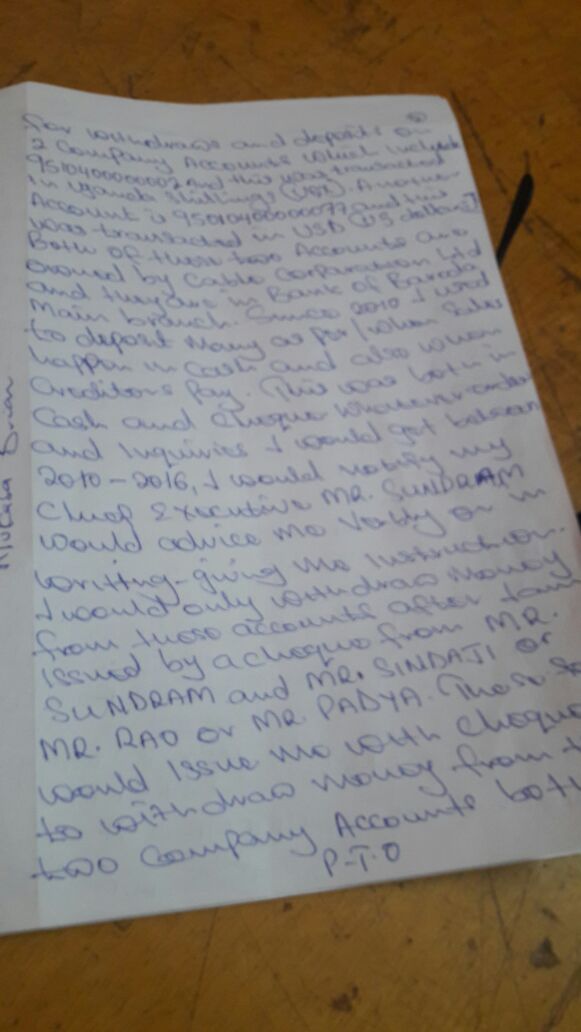 I don’t have the exact amount off my head unless if we got the bank statements as all the money used to go through company accounts to me and then to the final destinations,’ he added.

According to Mr. Mukasa’s statement, he fell out of favour with his bosses, Sundram and Sindaji, when US$ 250, 000 of the bribe money was allegedly stolen from him the Nakasero outlet.

Ministry of Education: Learners, teachers not allowed to use public transport...

Prime Minister flags off 10 ambulances to major highways in the...