The Muslim community has written to government, challenging a ban against Muslim nurses and midwives wearing veils while on duty in government health facilities.

Through their umbrella organisation, the Muslims contend that the policy is discriminatory in nature on religious grounds.

In the letter signed by Muslim Peace Building Network Uganda Chief Executive Officer (CEO) Mustafa Mutyaba and addressed to the health ministry, Muslims want to the decision that was recently announced by Hospital Directors and Principal Nursing Officers to be repealed. 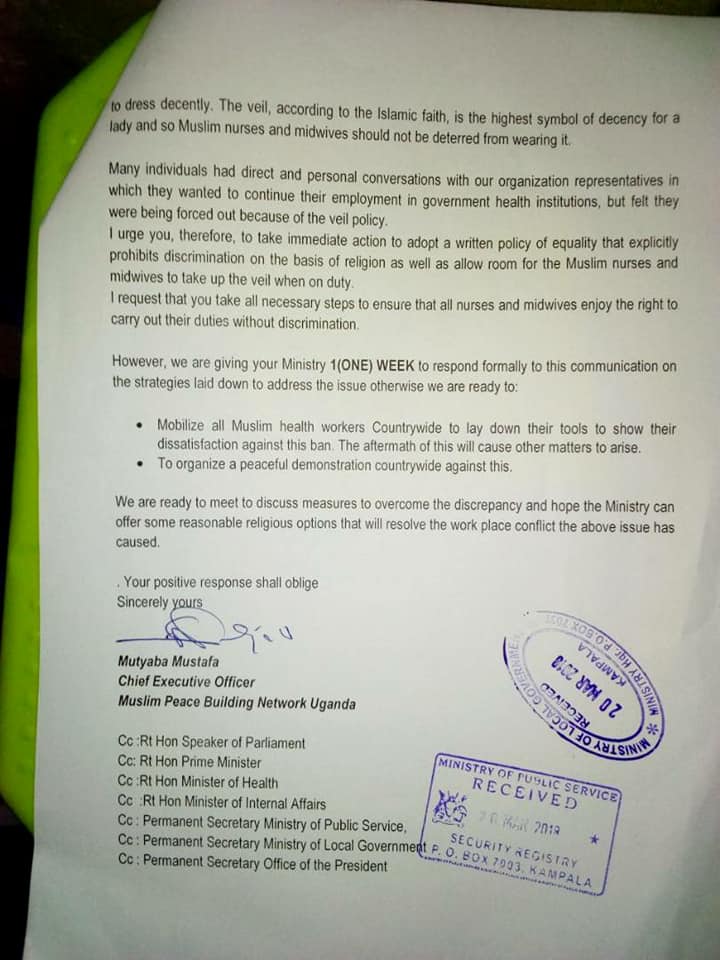 “I am writing to express my concern over the ban on veils for Muslim nurses and midwives in government health institutions and to draw your attention for immediate action by the MOH toward addressing the above,” reads the letter in part.

Mutyaba, who gave the ministry a one-week ultimatum before considering industrial action, further says he is disturbed by the directive which denies the Muslim health workers the freedom of expressing their religious beliefs.

‘Uganda has a fundamental right to allow its citizens carry out their without discrimination there making it illegal for some on to have a rule or policy or practice that puts some one of a particular religion at a disadvantage including Muslim nurses and midwives to veil while on duty yet the veil is regarded as part of their faith,’ Mutyaba stated.

‘I urge you there to take immediate action to adopt a policy of equality that explicitly prohibits discrimination on the basis of religion as well as allow room for Muslim nurses and wives to take up the veil while on duty’, Mutyaba adds.