Ms Museveni rarely celebrates her birthday like other African First Ladies that like pomp.The event took place at State House-Entebbe.

She has been the First Lady of Uganda since 1986. She is married to Museveni, with whom she has four children.

Ugandans across the country including different politicians and relatives congratulated her by sending their birthday wishes via social media. Among those were her husband and her son Gen Muhoozi Kainerugaba.

“Please join me in wishing Maama @JanetMuseveni a happy 70th birthday. She is an exemplary mother to our children and has mothered many other children in this nation. May God grant you many more years of continued health as you serve this country?” President Museveni tweeted. 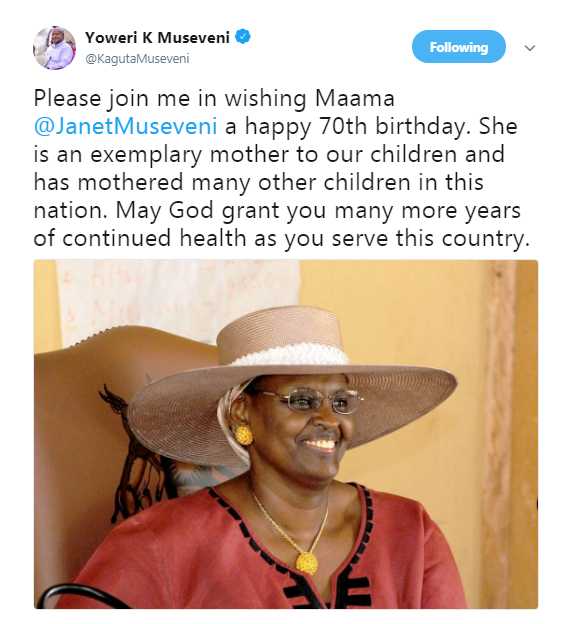 Gen. Muhoozi, son to the First Lady also sent his birthday message tweeting; “Happy birthday to my dear mother @JanetMuseveni. May you have many more happy and fulfilling birthdays Mama Janet.”

The party was organized by her relatives at State House in Entebbe.
Janet previously served as Minister for Karamoja Affairs from 2011 to 2016. She also served as the elected Member of Parliament representing Ruhaama County in Ntungamo District in the same period.

She is seen as a powerful figure that has molded the Museveni family as her husband spent considerable time the trenches fighting.