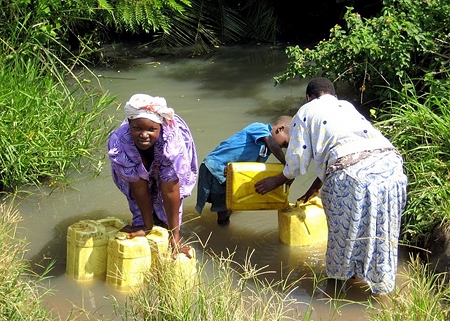 Three out of four or 74 per cent of Ugandans have access to an improved water source, according to the new findings released by Twaweza in a research brief titled, “Clean and Safe? Ugandans’ experiences and opinions on affordable access to clean and safe water”.

The brief is based on data from Sauti za Wananchi, Africa’s first nationally representative high-frequency mobile phone survey. The findings are based on data collected from 1,971 respondents across Uganda in January to February 2018.

The research brief shows that Ugandans in urban areas (86 per cent) are more likely to use improved water sources than those in rural areas (69 per cent), as are richer Ugandans (84 per cent) compared to poorer ones (71 per cent). Improved water source in the report means; one that provides cleaner and safer water.

Nonetheless, the report indicates that in both urban and rural areas, boreholes are the main source of drinking water for more households (rural 38 per cent, urban 23 per cent) than any other type of source. Even in urban areas, just 2 percent of households have water piped into their dwelling. One out of six rural households (15 per cent) depends on surface water sources such as rivers, streams, dams and lakes, though this water can be very unclean.

The brief says that rainwater can provide an affordable and accessible alternative source of clean water; and eight out of ten households (78 per cent) do harvest it. However, less than One per cent use it as their main source of drinking water. Further, for most households (69 per cent), the rainwater ran out after a week or less, the last time they collected it. Less than one out of ten households (seven per cent) was able to use it for a month or more.

The research shows that rural areas are also disadvantaged in terms of time. It takes 1 hour and 11 minutes on average to collect water in rural areas compared to 49 minutes in urban areas. Despite these differences, a similar and substantial proportion of rural (14 per cent) and urban households (10 per cent), as well as richer (10 per cent) and poorer (15 per cent) households have to spend over two hours collecting water.

Overall, citizens are not satisfied with the trends in access to water. Four out of ten citizens (40 per cent) say their access to clean and safe water has become worse over the past 12 months, compared to three out of ten (30 per cent) who say it has improved.

Marie Nanyanzi, Sauti za Wananchi Officer at Twaweza, said: “On the positive side, rates of access to improved water sources are high by regional standards and, according to other data sources, appear to have been steadily rising in both urban and rural areas. On the other hand, many citizens still use surface water; spend hours collecting water and find the number of water points insufficient and the cost of water high. And citizens are dissatisfied with how water services are being managed.”

Dr Mary Goretti Nakabugo, Uganda Country Lead of Twaweza and Regional Manager, Uwezo East Africa, said: “Despite some important successes, the story around access to water is one of manifest inequity, with rural areas facing more marked challenges than urban areas across many dimensions.

In addition, the slower rate of growth in access to improved water in urban areas presents challenges for the future with population growth and increased rural to urban migration. The government will need to double down on efforts in both rural and urban Uganda to ensure that the hard-won gains of the last 20 years are not eroded.”