A petitioner has asked President Yoweri Museveni as the appointing authority in the country to sack Bank of Uganda (BoU) Governor Emmanuel Tumusiime-Mutebile and his deputy Dr. Louis Kasekende as well as the Minister of Finance Matia Kasaija for the alleged mismanagement of the affairs at the Central Bank.

“It is in that regard that we humbly request that you exercise your powers as the appointing authority and fountain of honour by relieving the three parties namely Emmanuel Tumusiime Mutebile Louis Kasekende and Hon Matia Kasaija,” wrote Dr Paul Bamutaze.

Dr Bamutaze, a businessman, in his letter dated February 18, 2019 argues that Tumusiime-Mutebile and Kasekende have failed in their duties leading to the mismanagement of the affairs of BoU and illegal sale of properties of defunct banks such as Crane Bank Limited (CBL), Global Trust Bank Uganda (GTBU) and National Bank of Commerce (NBC).

He also argued that former BoU executive director of supervision MS Justine Bagyenda be prosecuted for what he called her heinous acts and abuse of office.

He says in his letter that Tumusiime-Mutebile, Kasekende and Finance Minister Matia Kasaija have failed to fulfill their administrative, managerial and supervisory roles, making them unfit to hold their positions.

“It is in this regard that we seek your intervention in the following matters and request that you prevail over the Governor Bank of Uganda, Deputy Governor Bank of Uganda and the Minister of Finance who have failed in their supervisory roles in the proper management of the affairs of the Central Bank,” he complained. 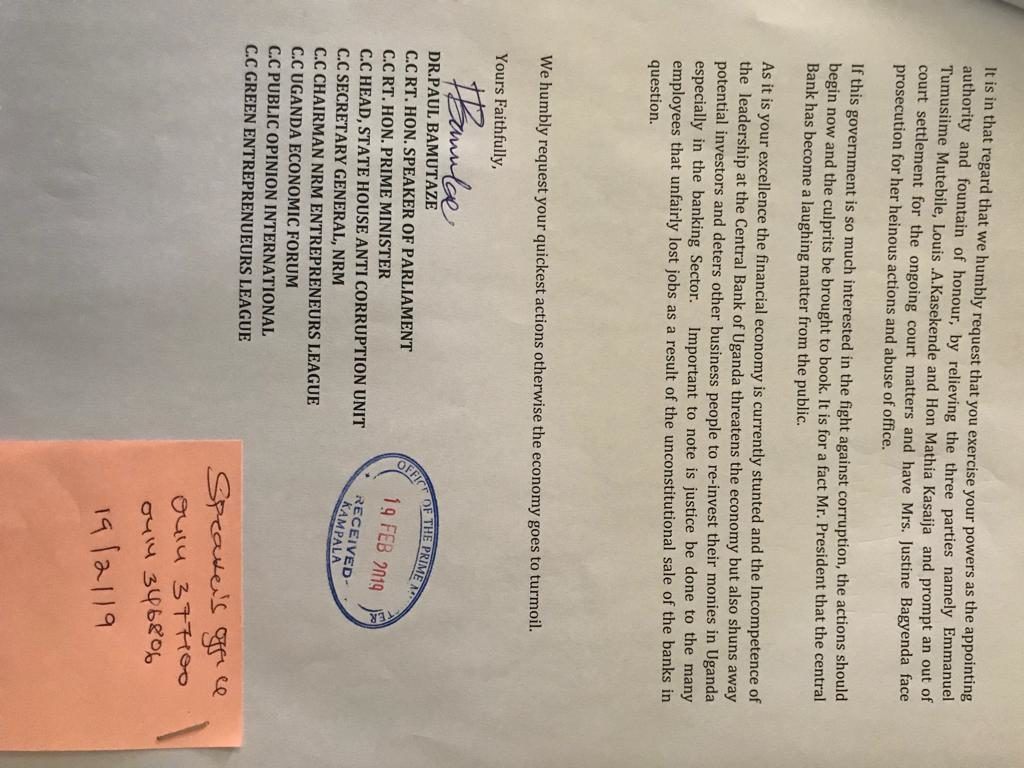 He continued that the actions of the three officials have caused so much instability and if not immediately well handled are likely to cause a financial crisis.

Meanwhile the out-going parliamentary Com­mit­tee on Com­mis­sions, Statu­tory Au­thor­i­ties and State Enterprises, (COSASE) let by Chairperson MP Abdu Katuntu is on Wednesday expected to file its final report following the conclusion of its probe into Bank of Uganda over the controversial closure of seven commercial banks such as CBL, GBTU, NBC, Teefe Trust Bank, Greenland Bank, Cooperative Bank and International Credit Bank.

The report will be presented to parliament for debate where recommendations to improve bank of Uganda operations are expected to be aired out by the MPs.