A Ugandan citizen has petitioned the Judicial Service Commission (JSC) not to appoint the Inspector General of Government (IGG), Justice Irene Mulyagonja, as judge of the Court of Appeal, saying she lacks the integrity required of anybody to serve in that position.

Justice Mulyagonja recently shocked the public when she applied to be considered as judge of the Court of Appeal. She faces competition from a number of other individuals. 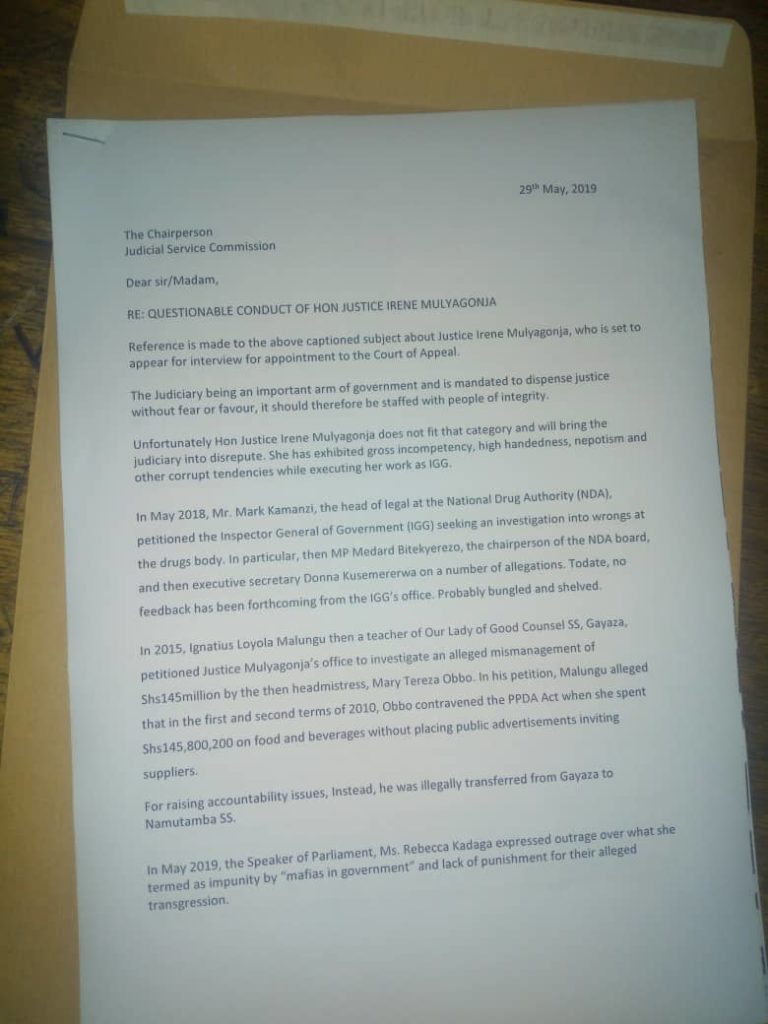 The petitioner fears that if Justice Mulyagonja is appointed to that post, she will bring the judiciary into disrepute. “She has exhibited gross incompetence, high handedness, nepotism and other corrupt tendencies while executing her work as IGG,” he says. 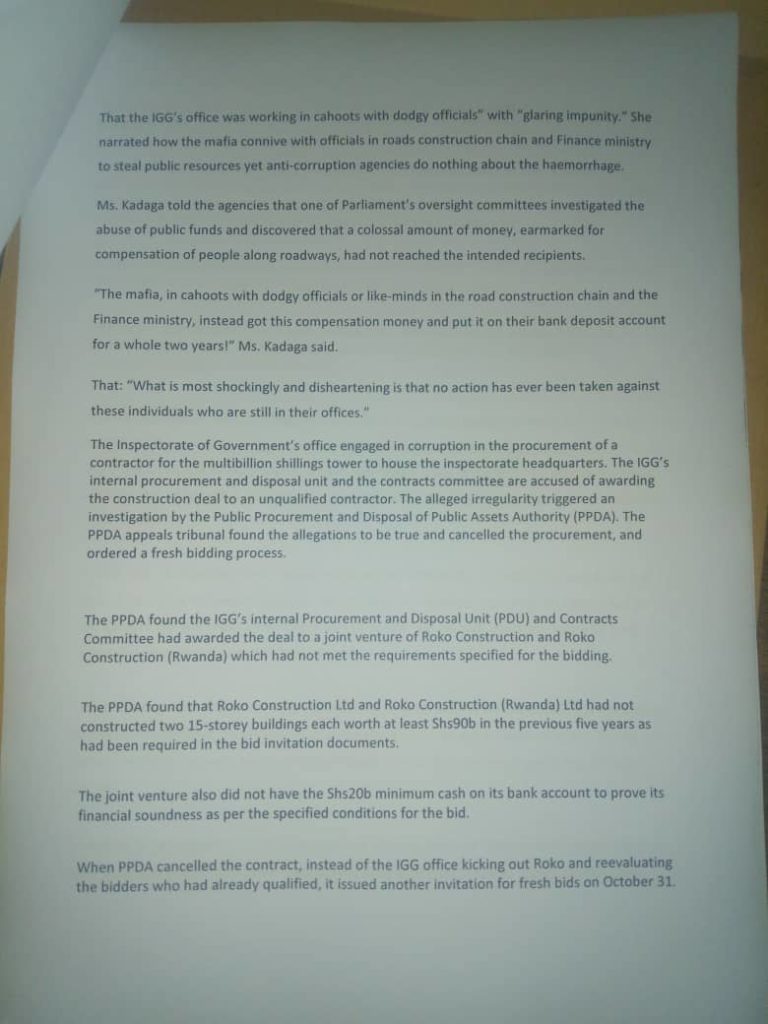 The petitioner cites the case of Mark Kamanzi, the head of legal at National Drug Authority (NDA) who in May 2018 petitioned the IGG to investigate the wrongs at the drugs body but the IGG never acted. Kamanzi wanted IGG to investigate then MP Medard Bitekyerezo who was Chairperson of NDA board and then Executive Secretary Donna Kusemererwa over a number allegations. Todate, he says the IGG has never given any feedback, the petitioner stating that probably they were bungled and shelved. 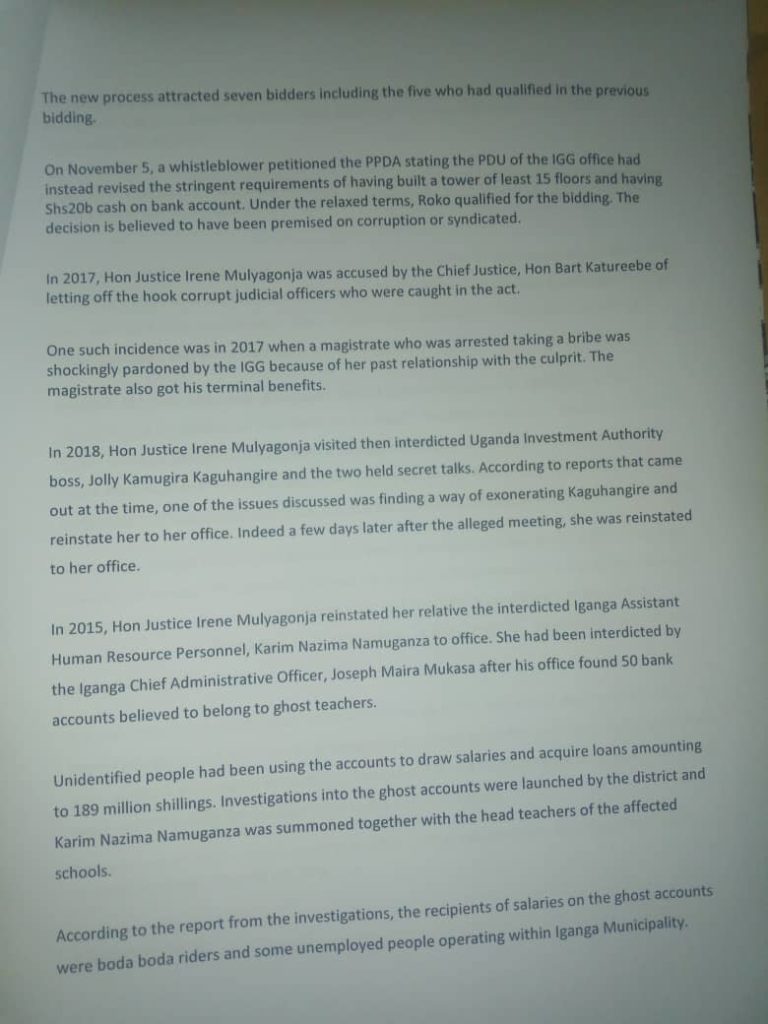 He further alleges that in 2015, Ignatius Loyola Malungu, a teacher of Our Lady of Good Counsel SS, Gayaza, petitioned Mulyagonja’s office to investigate an alleged mismanagement of Shs145 million by the then headmistress, Mary Tereza Obbo, who spent that money on food and beverages in disregard of the PPDA Act which requires placement of advertisements inviting suppliers to bid. The petitioner states that Malungu was illegally transferred to Namutumba SS for raising accountability issues of the former school.

The petitioner further accuses Mulyagonja of not acting on a number corruption related cases even when they were reported to her office.

One of those, he says, officials from the inspectorate of government engaged in corruption in the procurement of a contractor for the multi-billion shillings tower to house the inspectorate’s headquarters in Kampala. The inspectorate’s internal procurement and disposal unit and contracts committee, according to the petitioner offered the contract to unqualified joint venture of Roko Construction and contractor-Roko Rwanda which not meet bid conditions as established by PPDA team. He says Mulyagonja watched as her staff changed the conditions to suit the joint venture of Roko Construction and contractor-Roko Rwanda which even didn’t have Shs20 billion minimum cash on its bank account to prove its financial soundness as required by the bid document.

The petitioner also alleges Mulyagonja did not take any action when allegations some time back reached her desk that the Health Ministry had left out qualified people and instead recruited people without qualifications required as medical assistants. They were believed to be related to top officials in the health ministry.

More accusations against Mulyagonja can be read in the letter uploaded 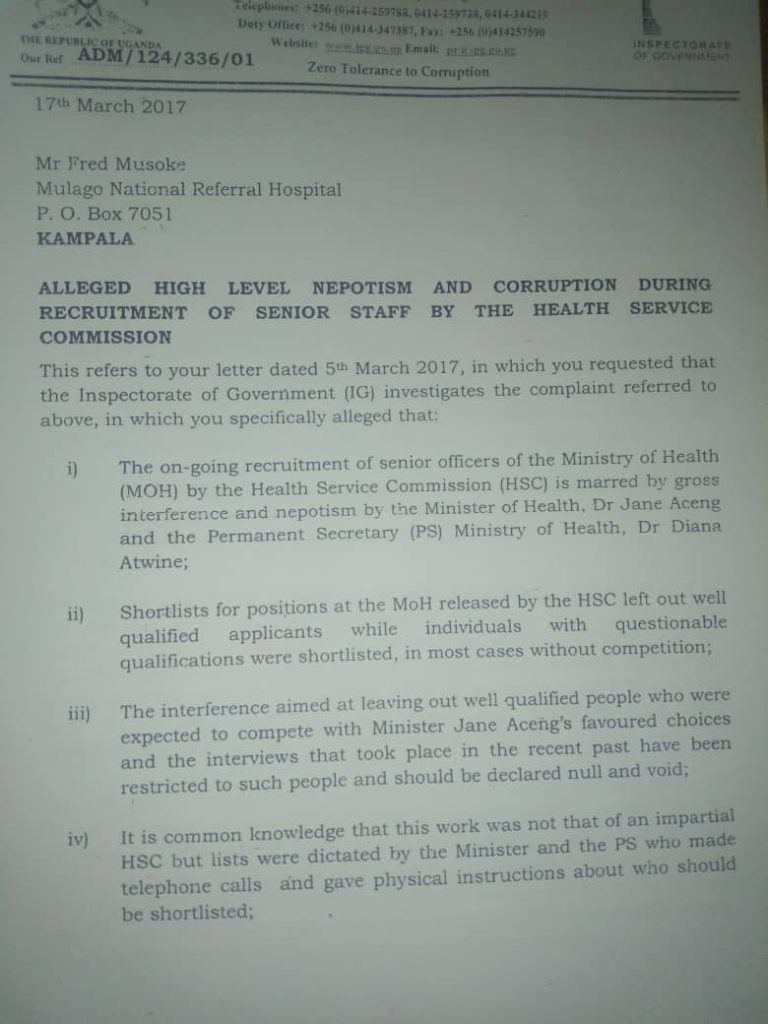 When Eagle Online called Mulyagonja on her mobile phone said it isn’t the first time such allegations come up. She said the Judicial Service Commission (JSC) and the appointing authority who happen to be the president have their internal mechanism of verifying such allegations.