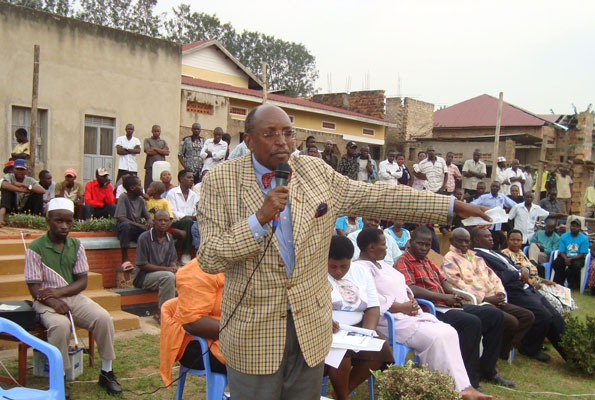 Veteran politician, Yonasani Kanyomozi, has said the construction a dam will not have an impact on Murchison Falls if it is put underground as the Uganda People’s Congress (UPC) government had planned in the 1960s.

“The Dam will have no impact on the falls if it is put underground as we had planned in the late 1960’s. The river flow at the Murchison is above 600cubic meters. You need only 100cubic meters to run the turbines underground. The remaining 500cumecs will fantastically make the falls as if nothing has happened. Please check the archives of UEB if they were not destroyed or privatized!!! Kanyomozi Yona,” he said in reference to an on-going recent campaign to block the move to construct the dam after Electricity Regulatory Authority (ERA) received an application from a company to build the dam near the famous falls.

Kadaga said the government must respond to the growing opposition to the dam project. “The country is on tension; the hoteliers are on tension and our tourism industry is under threat, we need early assurance on this issue,” she said.

State Investment Minister Evelyn Anite days ago also blasted those planning to construct the dam at the falls. “I don’t see the logic of constructing a dam and generating electricity there,” Ms Anite said, adding, she agreed with the bigger public opinion that government should not build the dam at the spot.”

The proposal to construct the dam was submitted to ERA on June 7, 2019 by Bonang power project. “Bonang Power Energy (Pty) Limited intends to undertake detailed feasibility studies and other activities leading to the development of the above mentioned power project whose proposed installed capacity is 360-megawatts,” the notice read in part.

However, the proposal has been rejected by conservationists, tour operators, nature lovers and the entire tourism fraternity in Uganda. Within 2 weeks after the announcement, over 3000 people have signed the petition against the construction of a hydropower plant at Murchison falls national park.

The proposed dam is to be constructed on top of the falls about 65 kilometers, west of the recently constructed 600 MW Karuma Hydropower dam which will be officially commissioned in 2020.

Situated in the hearty of Murchison falls national park, Murchison falls is one of the natural wonders that made Uganda be called the “Pearl of Africa”. The falls is undeniably one of the top tourist attractions in the country, a must visit by most travelers on Uganda safari.

Many people have reacted in resistance to the construction of the power project at Murchison falls. The top petitioners in this are the Uganda Wildlife Authority (UWA), a government body responsible for tourism and wildlife conservation in Uganda together with Uganda Tourism Board (UTB) responsible for tourism product development and marketing in Uganda and the Association of Uganda Tour Operators (AUTO) which joins together all travel and tour operators in Uganda.

The above three bodies have initiated the campaign (“SAVE MURCHISON FALL”) via social media networks mainly Facebook, Twitter, Whatsapp, and emails urging lovers of Murchison fall to petition against the hydropower project proposal. Interestingly, the campaign has been welcomed and joined by several people counting to over 25,000 by now.

Construction of the Murchison falls dam, they say, will definitely shut tourism to the mighty falls. This will limit the number of tourist arrivals to Murchison falls national park since the falls are a major attraction in the park. Also, the construction of a power dam is against the efforts to promote tourism in Uganda. The petition was initiated by Amos Murungi an environmentalist and welcomed by many nature lovers who willingly signed the petition via social media especially Whatsapp, Facebook, Twitter, and email.

Murchison falls is just one of the target areas where Bonang Power Limited plans to construct hydropower dams. Other areas in Question include Agog, Uhuru, and Kiba. The construction of a power dam at Murchison Falls will generate 2,550 MW of electricity creating reliable supply to the country and enhancing economic development, they say.

Murchison falls is one of the major tourist attractions in Uganda, which attract thousands of travelers to the park. A boat cruise to the bottom of the falls is a must do, a hike to the top of the falls offers visitors spectacular views of the falls and the park while the delta area which forms part of Murchison fails is the best sport for lots of birds and water animals such as hippos, crocodiles, and hippos among others.

About Bonang Power Project
Bonang is a power company that was established in 2014 by tycoon Ernst Moloi with its headquarters in Norway. Some people say that the project has other offices in South Africa. Since its establishment, Bonang has successfully built 2 power dams and the one at Murchison falls will be the 3rd.

The vegetation in Murchison falls National Park comprises of main savannahs while woodland and riverine forests cover other areas. These serve as food and habitats for various birds and wild animals. The park is known to have a high concentration of wildlife which includes over 76 mammal species and over 451 birds hence one of the notable birding spots in Uganda.

Petitioners say the construction of a hydropower project will kill tourism in Murchison falls national park. Join the petition today and save Uganda’s mighty falls for sustainable tourism.

The Tourism minister, Prof Ephraim Kamuntu, yesterday, said that tourism was the major driver for our economy that Uganda’s earnings from the sector is far bigger than coffee, tea, cotton and tobacco”.
“What has happened so far was just a notice [on intention to develop dam at Murchison Falls]; it is not a project,” he said, stating he had been inundated with petitions against the dam proposal.

The number of tourists flocking into Uganda in 2018 increased by 300,000 to 1.4 million from the year before, bringing in millions more dollars, with Murchison Falls National Park being the second biggest contributor to the tourism revenue.