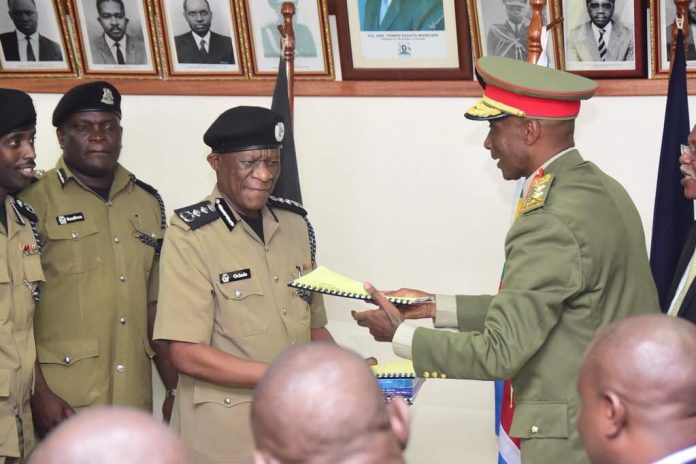 When President Yoweri Museveni appointed Martin Okoth Ochola twenty months ago to replace the embattled Gen. Kale Kayihura, many Ugandans jubilated thinking that the force now led by a civilian would be civil, as Kayihura’s had abused and tortured many, especially those in the opposition, journalists and students at higher institutions of learning.

Since Ochola took over from Kayihura, the police force has remained the same as it is militaristic in nature when it comes to field operations. It has failed to delink itself from politics, and appears to be totally against those opposed to the current government. The impartiality of the force is therefore questionable when the constitutional provisions on politics in the country are considered.

For instance, Museveni’s number political rival, Rtd. Col. Dr. Kizza Besigye, today continues to face the wrath of the police just like he did during the Kayihura era. Of course other opposition leaders also continue to face the same wrath expressed in teargas, live bullets, water cannons, pepper spray and flocking among others.

Further the journalists who report on political events in the country are also victims of IGP Ochola’s men in uniform. The torture that they faced under Kayihura has been replicated by the policemen serving under Ochola. The professionals who bring information to the public, have been brutalised by way of being beaten, clobbered, flocked on roads, teargassed and threatened to be shot by the notorious policemen.

Ochola’s police which seems to have assigned itself the duty of the custodian of freedoms of expression and assembly is also anti- students’ peaceful demonstrations. They also don’t want any peaceful demonstration by other dissatisfied groups in Uganda. One would say Kayihura’s did better when it came to students.  At least top officers like the late AIGP Felix Kaweesi and Kayihura himself engaged students on some occasions.

The latest attacks on Makerere students will for many years haunt Ochola, as his men tortured, broke into students’ halls and of course were accused of molesting female students, beating up disabled students and were as well as accused of destroying students’ properties including electronics. If we didn’t have social media today, the force would have denied the accusations. Thanks Facebook, Whatsapp, Twitter and Instagram.  Congratulations Mr. Ochola and hope you will retire thanking your men for torturing Ugandans after all you have not come out to condemn torture of students and Besigye.

But remember the EU and USA urged you to bring your men to order after tainting the image of the country and the East African region at large. Ugandans are waiting for reports.

More, just like Kayihura’s police, some of Ochola’s police officers continue to be involved in corruption, highway robbery, murders, theft, land grabbing and aiding land grabbing. It seems the officers beat up journalists on their duty because they have exposed them to the public. Otherwise why would a policeman beat up a journalist on duty? Why would a journalist’s camera and notebook be destroyed? Why would a police officer shield his face from the journalist’s camera if he is doing the right thing? It happened only days ago as policemen tortured Dr. Besigye again. It happened as they tortured Makerere students.

When it comes to bribes, traffic police in Ochola’s era is no better. They continue to ask for bribes from motorists. One could say this kind of corruption has come down in Kampala area but it becomes worse as one moves to upcountry towns and rural districts. Sniffer dogs are supposed to be a free service but citizens have to pay for this service. All this is happening under the watchful eye of Mr. Ochola who promised to change the force after the unceremonious departure of Kayihura. But no big changes so far realised.

In conclusion one would say leadership in the police changed faces but the characteristics of the force, epitomized by brutality, remain the same. IGP Ochola has failed and will retire without introducing any fundamental changes in the Uganda Police Force. Question is whether those officers deserve to wear the national uniform of what is supposed to be a pro-people force.