The State Minister for Higher Education, John Chrysostom Muyingo is on spot following the incarceration of a teacher who exposed his Seeta junior school Mbalala Campus as a center of examination malpractice in the recently concluded Primary Leaving Examinations (PLE).

The school was exposed by its employee Richard Okello who is also an English teacher. According to Mr. Okello, the school is owned by Minister Muyingo. In the recently concluded PLE exams, Mr. Okello was appointed as an examination scout and working under a team led by Commissioner CID administration Richard Mwesigye.

It is allegedly that during that period, Mr. Okello and the team arrested two of Seeta junior school teachers known as Mr. Ekaju and Mr. Odeke and Mobile phones recovered from them indicated that they had circulated leaked examination on WhatsApp platform to several schools including Global Junior School, Mukono Junior School, and Shiloh Junior School Jinja among other schools.

Narrating his ordeal, Mr. Okello said, when the Minister Muyingo heard that his teachers had been arrested on charges of examination malpractice, he reportedly pushed for their release on police bond by Jinja road police station.

It is alleged that after securing the release of the two teachers, Minister Muyingo allegedly used his power and connection influenced and had Mr. Okello implicated and charges brought against him. 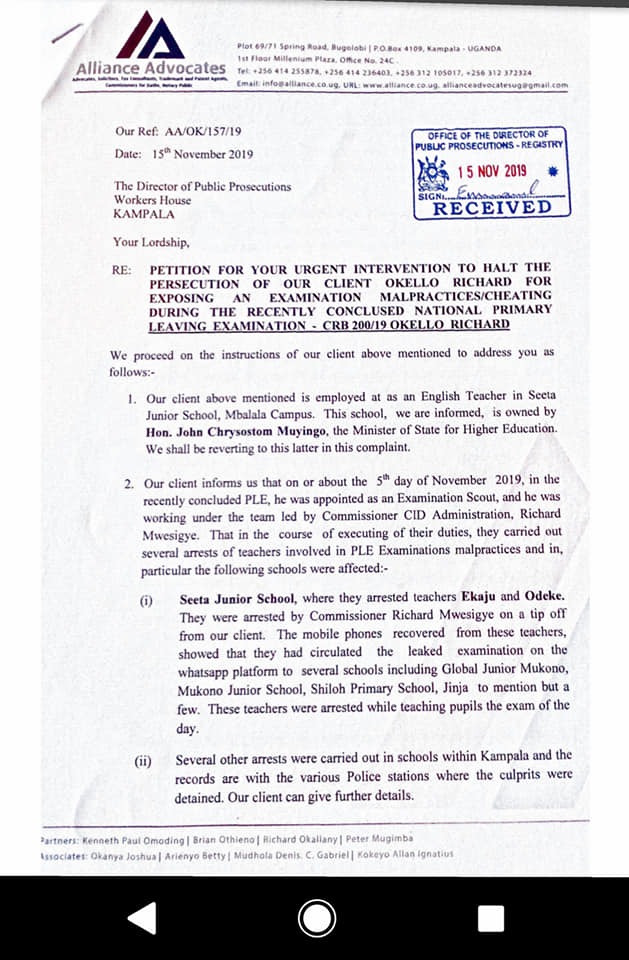 Through his lawyers, Mr. Okello has petitioned to Directorate of Public Prosecution (DPP), calling for supervision of all the charges brought against him.

“On 6th November 2019, Okello was reportedly arrested by the body guard of Mr Muyingo from Seeta Junior School-Mbalala Campus staff quarters and has been detained and transferred to various police stations of Mukono central police station, Katwe police station and Jinja road police station.” reads in part of the petition.

They wondered why police is not focusing on the released teachers instead of manufacturing cases against him after helping in the exposure of vice that is eating up the sector.

Efforts to get a comment by Eagle Online from Minister Muyingo were unsuccessful as he didn’t answer his mobile phone.