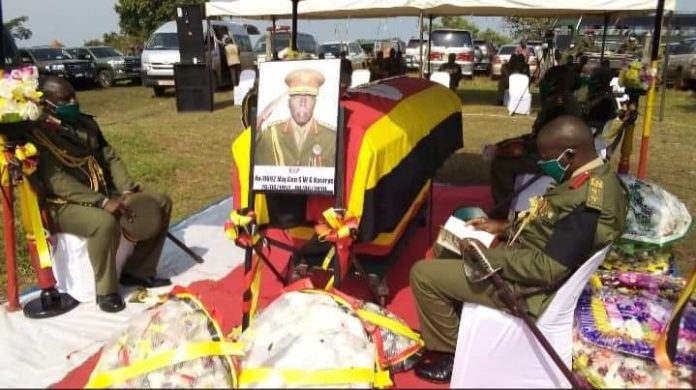 Maj Gen(rtd)Kasirye Ggwanga has this afternoon been laid to rest at his ancestral home in Nkene Village, Busunju County, Mityana District.

Maj Gen Kasirye breathed his last at Nakasero Hospital on Tuesday morning where he had been admitted for weeks.

A post-mortem is being carried out to establish the exact cause of death.

Due to restrictions put in place to contain the spread of the Corona virus,Maj Gen Kasirye’s burial was restricted to the public.

His children,led by Nagitta, eulogized him saying he was their best friend and a ‘wonderful man’.

“Daddy had a humble beginning in life and he made the best of it,” she said.

They lauded the UPDF and President Museveni for always working closely with their departed father and giving him an opportunity to serve his country.

Those who loved him said he was a tough environmentalist while those who loathed accused him of impunity.

From burning a grader to deflating the tyres of musician-cum-NRM activist Catherine Kusasira,Maj Gen Kasirye was never far from controversy.

What always irked those who fell victim to his high-handedness was that law enforcement agencies could never bring him to order.