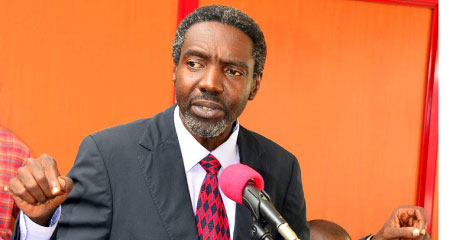 The Court of Appeal has dismissed James Michael Akena’s petition seeking to stay as the president of Uganda People’s congress (UPC). Akena was in 2015 declared the Party president following a contested election conducted by the Party Electoral Commission (PEC).

Upon declaring him in July 2015, through their lawyers led by Julius Galisonga of Galisonga and Company Advocates, party members led by Prof. Edward Kakonge, Otto Isaah Amizza and Joseph Bbossa ( deceased) petitioned the High Court seeking for nullification of his election.

In December 2016, the former Deputy Chief Justice, Stephen Kavuma issued an order stopping any party member from challenging the election of Akena. It was later disposed of in July this year and the matter was fixed for hearing.

In December 2015, the High court judge Yasin Nyanzi, quashed the election of James Michael Akena as the president of Uganda People’s Congress. In his ruling, the judge said the election was illegal, null and void because it violated the constitution of the Party. The declaration of Akena by the delegates conference was illegal and void and of no legal consequence because it violated the party constitution.

Akena and his group however, petitioned appellant court to stay his election on grounds that the trial judge erred in the law and fact premised himself on wrong findings and allowed the respondent’s claims among others grounds.

In their ruling, a panel of judges led by Justice Elizabeth Musoke, Christopher Madrama and Irene Mulyagonja dismissed his application and ordered that the party should conduct nominations and elect a new President in conformity with the constitution of UPC.

They ordered that each party should bear its costs.