President Yoweri Museveni has advised the former owner of Simbamanya house, Peter Kamya that the transaction that resulted into his properties being auctioned was legal.

Museveni further said that since it was Kamya who defaulted on his loan payment, he can further seek court redress at his liberty.

“Following receipt of your complaint to me about the above illegal sale of your properties by Equity Bank, I directed the Attorney General  and the Governor, Bank of Uganda to investigate the complaint and report back. I have since been advised that the sale was lega, since you had  defaulted on payment of the loan and did not deposit 30% of the loan  amount  as was ordered by court” President Museveni wrote in a October 25, 2021 letter.

Mr Kamya had earlier petitioned the president seeking his intervention in a legal battle with Equity Bank. One of his arguments to the president was that he was not considered for #Covid-19 loan restructuring by the bank. However, Equity Bank says Kamya didn’t qualify for loan restructuring as his loan obligation was from 2012 and not one obtained during the #Covid-19 period.

In August 2012, Equity Bank Uganda and Equity Bank Kenya extended a loan worth  $10 million to Simbamanyo to finance the construction of a hotel in Luzira and also to take over Kamya’s prior loan from Shelter Afrique. The funds came from both Equity Kenya and Uganda.

Kamya continued to receive money from the rent payments but did not remit any for his loan obligations.

The bank seized Simbamanyo House and Afrique Suites Hotel on Mutungo Hill in Kampala last year after the city tycoon Peter Kamya and his Simbamanyo Estates failed to clear loans to a tune of $10.8m (about Shs40 billion). 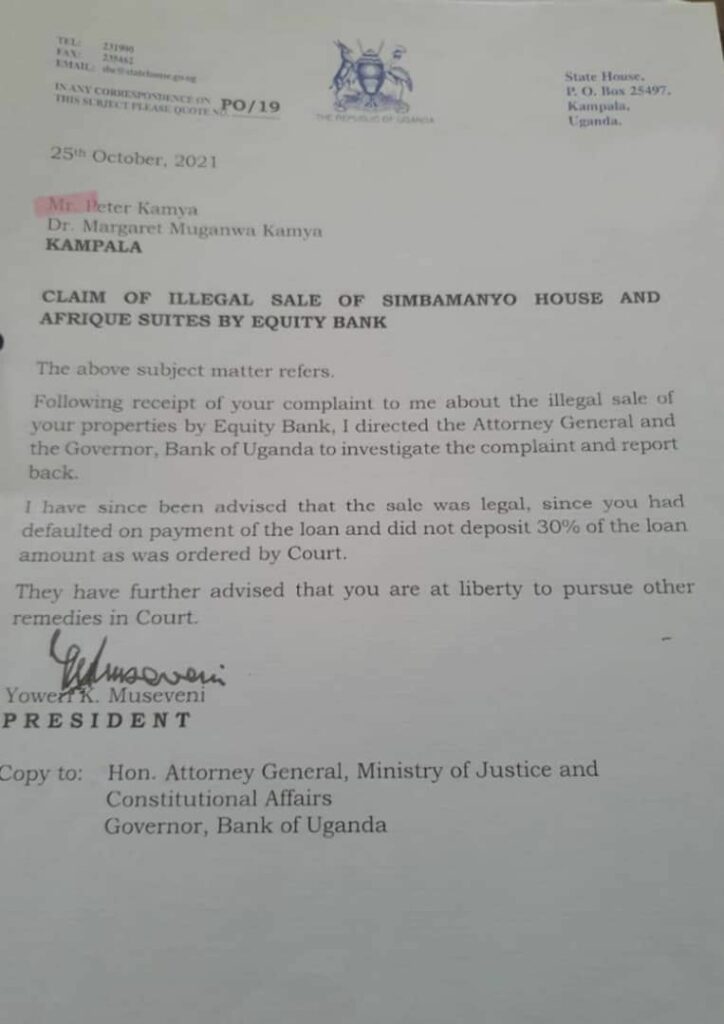 In their report to the President, Bank of Uganda defended the decision by Equity Bank to auction Simbamanyo House and Afrique Suits saying the transaction was done under the law.

BoU says Simbamanyo and Mr. Kamya failed to respect their loan obligation when they (Kamya) failed to payback the loan as agreed by parties as he continued receiving money from 2016 until September 2020.

“From 2016 to September 2020,  Kamya continued to receive from the mortgaged properties without considering paying back the loan but instead chose to ignore the agreement as he opted for legal means even with reminders no payment came through”

In detailed reported compiled for President Yoweri Museveni on the events surrounding Simbamanyo Estates Limited and Equity Bank Uganda Limited and Equity Bank Kenya Limited its indicates that between 2012-2014, the estate took a loan in excess of $7.1 million before interest and secured the said facilities by mortgaging LRV 2220 Plot 2 folio Lumumba Avenue (Simbamanyo House) and properties comprised in Kyadondo block 243 Plots 95, 958,2794,17800 and block 237 Plot 95 land at Mutungo (Afrique Suites).

“And by October 8, 2020, Simbamanyo did not deposit the said 30% as ordered by the court. In the absence of any further orders from court stooping the auction, the mortgaged properties were sold after a public auction, in accordance with provisions of the Mortgage Act and the Mortgage Regulations to the highest bidders”

In October 2017, Justice Billy Kainamura issued his ruling in the Miscellaneous Application No. 1159 of 2017 and, in accordance with the mortgage property Act, ordered Simbamanyo to deposit 30% of the outstanding loan amount otherwise Equity Bank Uganda Limited would be at liberty to sale of the mortgage properties at a public auction after 30 days.

Simbamanyo and Kamya had filed an application to stop the sale and transfer of their properties; Simbamanyo House located along Lumumba Avenue and Afrique suites in Mutungo. In October 2020 the court dismissed the application with costs.

Records show that Equity bank sold the properties to recover its $10 million loan acquired by Simbamanyo in 2017.

The Simbamanyo House at was acquired at $5 million about (Shs18.5 billion) by Meera Investments Limited which is owned by city tycoon and businessman Sudhir Ruparelia. The building has since been renamed the Gender and Labour House.

Simbamanyo has been involved in numerous court battles against the bank in which it challenged the legality of the $10.5 million unpaid loan.

The bank argued that the proprietors of Simbamanyo defaulted on their loan obligations when they failed to pay any money as required by the contract.