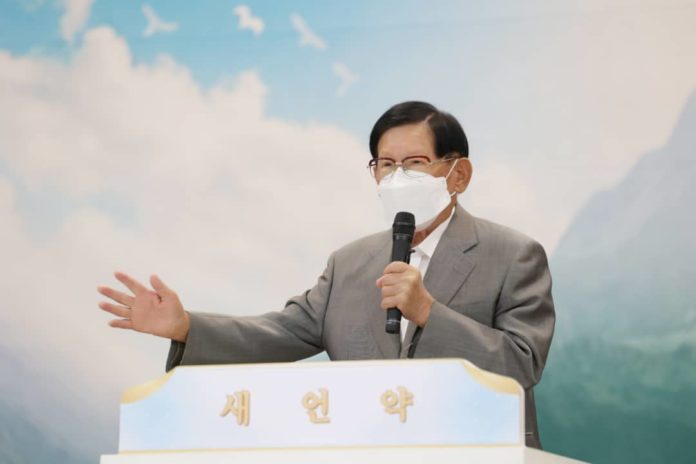 Chairman Lee Man-hee held an online seminar as a lecturer on the 4th of July; starting with the lesson of the Book of Revelation, the Shincheonji Church of Jesus, the temple of the tabernacle of the testimony (hereinafter referred to as Shincheonji Church of Jesus) completed the disclosure of the words of Introductory, intermediate, and advance courses in the period of nine months.

The seminar, which was held under the theme of Testifying to the 66 Books of the Bible’s Secrets of the Kingdom of Heaven and the New Covenant, the Revelation to World Pastors, Believers, and Journalists, has the meaning of finalizing the disclosure of the words of the Introductory, intermediate, and advance courses, which ended on June 27.

At the seminar, which was broadcast around the world through the official YouTube channel of the Shincheonji Church of Jesus, Chairman Lee began his lecture by saying, “If you have found any mistakes or errors in the lectures that the 12 tribe leaders and head instructors did, please always tell us.”

Starting with the history of God, who created everything with Words, Chairman Lee explained the creation and path of the world of Adam, Noah, and Abraham, and revealed that Jesus fulfilled the prophecy that God promised through the Old Testament prophet after Solomon’s betrayal.

As Jeremiah chapter 31 prophesized, Jesus came, sowed two seeds in Matthew chapter 13 for the creation of a new work, and explained that he made the New Covenant in Luke chapter 22. He also mentioned, “This New Covenant is that Jesus, who made the Old Testament, promised that he would come back as his second coming.” Chairman Lee went on to prove that what Jesus wants to fulfill in the New Covenant is the book of Revelation, and Jesus received the revealed book from God and fulfilled today.

Chairman Lee who emphasized “One must stand on their faith firmly as checking the promises of Jesus – when, where, and by what have been fulfilled, rather than believing Jesus without any prove”, asked them “shouldn’t you believe when you listened to testimony of all chapters of the book of Revelation and the Old and New Testaments testimony by chapters revealed by Shincheonji and they are correct?

Chairman Lee asked again, “If there is the word of life somewhere in the world now, wouldn’t it be right that one need to get it and attain eternal life?” and emphasized “one must come to the place where God and Jesus are and the word of eternal life comes from there.”

“When someone proclaimed the book of Revelation that no one has known on earth and heaven, how do you think he had known it unless God let him know?” said the chairman, and cried out “Didn’t you hear the fact that Shincheonji testified the Word to the whole world as recording it? Let us become one all together in the Word and come before God if you think the Word is correct.

Chairman Lee finalized his speech saying, “Just as the Old Testament was done, the New Covenant has been done. We have told all the important contents of the Revelation and the New and Old Testaments. Record them somewhere and watch it again and again to become one with the Word.”

Meanwhile, the online seminar of Introductory, intermediate, and advance courses at the Shincheonji Zion Christian Mission Center, which has been held since October last year, was successfully completed with 21 million views. In addition, the Shincheonji Church of Jesus said it is expected to produce 100,000 graduates at the Zion Christian Mission Center this year. Chairman Lee Man-hee’s seminar “Testifying to the 66 Books of the Bible’s Secrets of the Kingdom of Heaven and the New Covenant, the Revelation” can be watched on