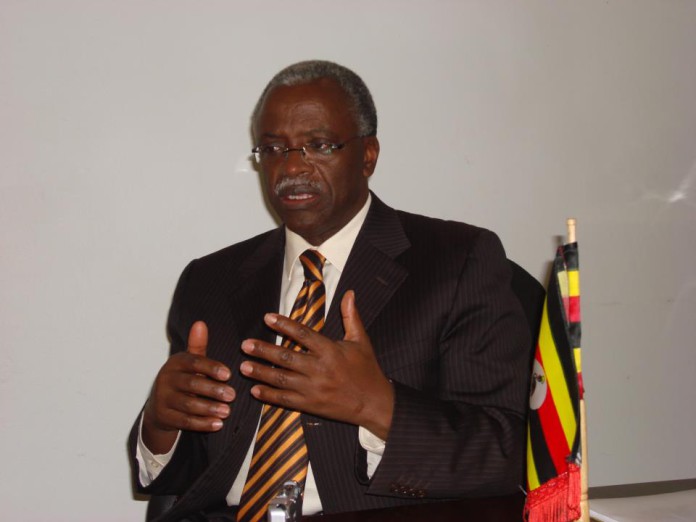 Former Prime Minister John Patrick Amama Mbabazi has broken the loud silence on his presidential ambitions, and announced that he intends to contest for party leadership in the National Resistance Movement and as its flag bearer in the forthcoming 2016 elections.

Mbabazi’s announcement comes in the wake of rife speculation by Ugandans that the former blue-eyed boy of President Yoweri Museveni had cowed from challenging his long-time political ally.

“ I come before today, to tell you that I will be seeking your vote, first within my party the NRM as its flag bearer; and later on in the whole country for President in the 2016 presidential elections,” he states.

In the typical Mbabazi flamboyance, the former premier released a statement on ‘you tube’ saying the current government under Museveni had become inept, and that the coming elections should mark the turning point in Uganda’s history.

‘It is about breathing new life into our system of government – a system that has become weak and inefficient,” Mbabazi states and adds: “This is the most important election in a generation; as a people we must choose between achieving success in the new global economy or nursing a tired nation – yesterday’s story.”

Mbabazi’s cracks with his boss started surfacing in February last year, when the former Premier hesitantly signed on a petition by Northern Youth MP Evelyn Anite, suggesting that the NRM endorse Museveni as the sole flag bearer for the party in the 2016 elections. Mbabazi, who was then Secretary General, was not impressed; he signed the petition as number 202, sparking off a bitter fall out involving Museveni’s and Mbabazi’s NRM supporters.

The ensuing period was to become one of anxiety, drawing in the two principals, Museveni and Mbabazi. The fallout out also drew in Mrs Jacqueline Mbabazi and her daughter Lanina Mbabazi, both vociferous political activists.

Not surprising then, in September last year Museveni swung the axe, firing Mbabazi from the post of Prime Minister. And in December the same year, Mbabazi was to be humiliated further when the party dumped the former premier as Secretary General, replacing him with Ms. Justin Kasule Lumumba, the then NRM Chief Whip in Parliament.

Not to be outdone, Mbabazi put on a resolute aura, charming crowds with his recalcitrant attitude. A hitherto reclusive man, he now began attending almost all functions he was invited to, sending his political rivals in overdrive, which has now culminated in the NRM threatening to take disciplinary action against him.

Mbabazi, 66, is the Kinkiizi West Member of Parliament, and has been engaged in Uganda’s politics for over four decades, at one time playing ‘hide and seek’ with the post-Independence governments of Iddi Amin, Milton Obote II and Tito Okello Lutwa. And when the NRM came to power in 1986, he was to become the first Director General of the External Security Organisation. A lawyer, previously Mbabazi has also served in cabinet, first as State Minister for Regional Cooperation, Attorney General, and later for Defence; as the first ever Minister full Minister of Defence in Yoweri Museveni’s government and, later as Minister for Security. It is from Security that Mbabazi was made Prime Minister after the 2011 presidential elections.

“As most of you know, I have dedicated many years of my life to serving the people of Uganda. My loyalty is absolute. It is to the people and Constitution of Uganda. It is to the founding principles of the NRM and the values for which I fought as a young man and for which many lost their property, liberty and even their lives,” Mbabazi, states.

It is not entirely clear when Museveni, Mbabazi and the NRM started parting ways, but in the not so distant past the former Secretary General played a leading role in trying to purge rebellious members from the party, notably making him cross paths with Lwemiyaga county MP Theodore Ssekikubo, Buyaga MP Barnabas Tinkasimiire, Kampala Central MP Muhammad Nsereko and Kinkiizi East MP Dr Chris Baryomunsi. Dr Baryomunsi has since been ‘rehabilitated’ and was recently named State Minister for Health in Charge of General Duties in the last cabinet reshuffle on March 1.

According to Mbabazi, there are eight pillars on which his presidential aspirations are hinged; reviving democracy, economic transformation, promoting equitable development, creating jobs, ensuring accountability, respect for rule of law and security of person and property, providing good health care and, enhancing quality education.

He also says that much as a lot has been gained since independence in 1962, and there is need to consolidate those gains.

“We have too much to be proud of to allow anyone to belittle those gains,” he states, in apparent reference to the leaders and system which he served for 43 years.

Went to Makerere University and graduated with a Bachelors Degree in Law (LLB) in 1975 and later joined the Law Development Centre (LDC) for his post-graduate diploma in law obtained in 1976.

Married Jacqueline Ruhindi Mbabazi, a daughter to Canon Ruhindi and together they have six children

Served in Cabinet under different portfolios from 1990s to 2014

Member of Parliament for Kinkiizi West in Kanungu District