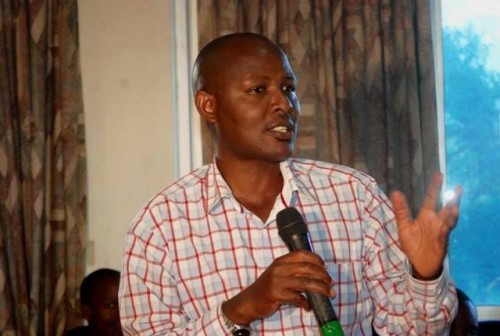 Rwomushana was arrested on Friday night in Kampala having been under close watch by police since Tuesday when he is said to have started sharing the photos on social media, and Police spokesperson Fred Enanga has confirmed the arrest of Rwomushana.

“We have arrested Charles Rwomushana, on credible information that the dangerous and questionable pictures of a ‘dead Aine’ were widely circulated by him online,” said Enanga in a statement.

The controversial photos which also landed two Redpepper editors in jail, reportedly first surfaced on Rwomushana’s Facebook wall, and below the photos were a sensational caption: “I am all in tears. Christopher Aine is dead.”

Enanga said the Red Pepper editor Ben Barybaha and his Kamunye colleague Simon Mubiru, who published the photos without verifying their correctness and authenticity, were released on police bond upon recording statements.

“He (Rwomushana) is now assisting police with investigations,” Enanga added.

Rwomushana has a history of controversy, and first came to the limelight when he served as Guild President at Makerere University in the early 1990s. Then, he was a strong critic of the National Resistance Movement government and also championed the cause of poor students at the university, through an organization called the Needy Students Association.

A vocal politician, Rwomushana was later elected to the Constituent Assembly to represent Rujumbura county, after which he was ‘rehabilitated’ by the NRM and appointed the Head of Political Intelligence in State House.

At one time he also served as the Resident District Commissioner (RDC) for Pader in Northern Uganda but later turned and became a strong critic of the NRM, often appearing on radio and TV shows castigating ruling government.

Meanwhile, the police spokesperson said despite the fact that questionable images of a photo of a dead body, were published and also posted in the print and social media, police highly believes the suspect is alive.

“This is to inform the public that the police are still actively looking for Aine Christopher, who remains missing, but believed to be in hiding, over his alleged involvement and connectivity to acts of assault occasioning bodily and grievous harm, to several victims in Ntungamo District, and also, in response to the criminal summons issued against him by the Chief Magistrates Court, in Jinja,” Enanga wrote in the statement.

He stressed that the police notice for his arrest remains valid.

Police therefore, calls upon members of the public who may be having knowledge of his whereabouts to provide it, so as to enable police establish the circumstances surrounding his alleged disappearance,” he said, before calling upon Aine ‘to come forward and hand himself over to the police for recording a statement that would assist him as in individual, family, police and the public to clear the uncertainty’.

Aine, who has a bounty of Shs20 million on his head, went missing over two weeks ago when he was allegedly arrested in Kyanja and the Go Forward team has since said that he was arrested by police.

Aine had been summoned by the police to record a statement regarding the violence that happened in Ntungamo when Museveni’s NRM supporters clashed with Mbabazi’s Go Forward supporters on December 12 last year.