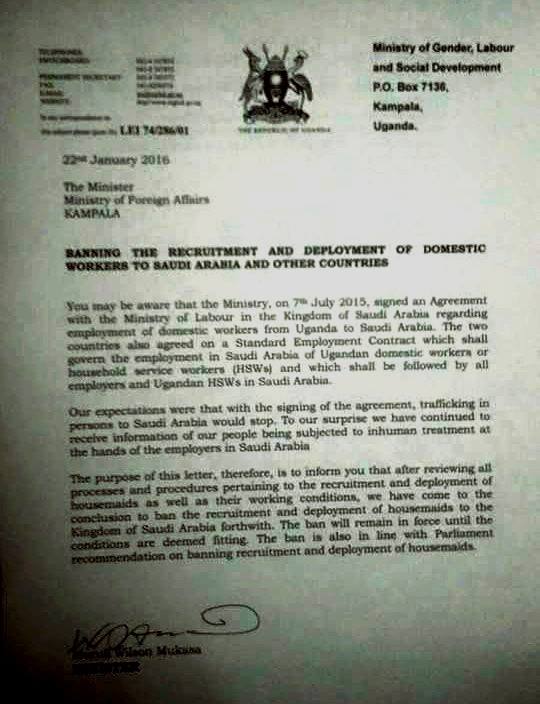 The government has banned the recruitment and deployment of domestic workers to Saudi Arabia ‘and other countries.’

According to a January 22 letter to the Ministry of Foreign Affairs and signed by the Minister of Gender, Labour and Social Development Wilson Mukasa Muruli, the Saudi government had breached its contractual obligations in regard to an earlier agreement on the maids, signed between the two countries.

The Ugandan authorities state that their expectations were that with the signing of the agreement, trafficking in persons to Saudi Arabia would stop.

However, this has not been the case as there have been continuous reported cases of breach of agreement, the release adds.

“To our surprise we have continued to receive information of our people to inhumane treatment at the hands of employers in Saudi Arabia,” reads the statement.

The Ugandan authorities further add that ban will remain in force until the conditions are dimmed fitting.

The Uganda government further clarified that the ban is in line with Parliament’s recommendation on banning recruitment and employment of maids to foreign countries.

This issue of exporting maids for labour is contentious and this is the second time in less than a year that the government is banning the export of Ugandan maids to work in the Middle East, where they are reportedly mistreated.

In January last year, the Uganda Parliament endorsed a motion to ban the travel of domestic workers to Arab countries following a heated debate in which legislators criticised the government for encouraging foreign companies to export young girls for work as domestic workers.