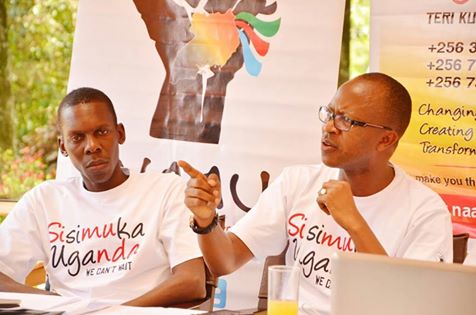 A civil society group led by controversial city businessman Frank Gashumba has vowed to fight tooth and nail to ensure that the ongoing polls petition doesn’t overshadow the need for justice and fairness for all Ugandans.

In a press briefing held on Sunday, the activists who claim to have members who subscribe to NRM, DP, FDC, UPC and those who belong to Go Forward said that while justice delayed is justice denied, and justice must be expeditiously done, for it should further be seen to be done, than merely done – in this case referring to the blockade by security forces at Dr Kizza Besigye’s residence at Kasangati, Wakiso District. Police maintain Besigye’s residence under a security ring accusing him of inciting violence and engaging in activities aimed at destabilizing the country, a charge Besigye denies.

“In another way, we respect courts and all the judicial processes for they are a pillar of justice and its ends, where we all run to pursue our inherent rights and their protection. While all cameras are pointed towards one of the presidential candidate’s election petition, an act of injustice still lags on one presidential candidate,” Gashumba a known Besigye supporter said in his speech.

High Court set May 5 as the date for hearing Besigye’s complaint.

He attacked The Elders Forum and The Inter Religious Council saying that since the presidential debates they had gone mute and forgotten their civic right to seek justice.

“It’s debatable if our elders and the religious leaders have taken a role to cure the injustices in the aftermath of the 2016 Elections. If the church doesn’t recapture its prophetic zeal, it will become an irrelevant social club without moral or spiritual authority. In a moment like this, during the apatheid struggle the religious leaders were at the forefront of the cause. Where are Uganda’s Desmond Tutus?

“If the supreme court with all its nine justices can work seven days a week for almost twenty four hours, to listen to an election petition for a candidate who came third in an election race, why does the chief justice fail to assign a single magistrate to expeditiously attend to Dr. Besigye’s illegal detention of over 31days and the same detention has been further sustained until May 4, 2016.