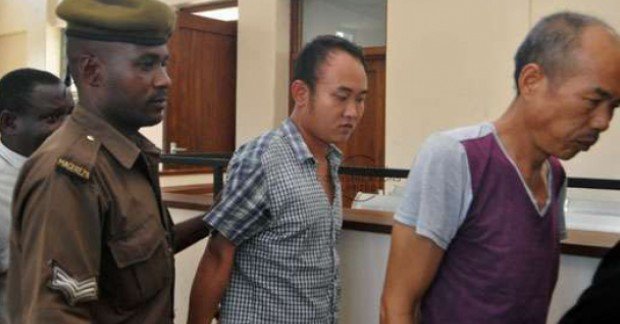 Our neighbors Tanzania are taking a hard stance against poachers and ivory smugglers, as two Chinese nationals have each received a sentence of 35 years for their crimes. They face 30 years jail for ivory smuggling and five years for bribery of police and wildlife officers.

The sentence imposed on the two Chinese men is thought to be among the highest punishments ever imposed in such cases in Tanzania.

Huang Gin, 53, and Xu Fujie, 25, were arrested at a house in Dar es Salaam back in 2013 and were found to be in possession of 706 pieces of elephant ivory valued at US$3.1 million. Those 706 pieces of ivory reportedly mean that 226 elephants had been killed in the east African country.

The Chinese men had reportedly entered the country in 2010 and stayed until 2013 when they were arrested in Dar es Salaam. They had posed as garlic importers and marine product exporters. The seized ivory pieces were discovered in sacks of garlic in the house where the two men lived. The ivory the men were caught with weighed 1.8 tons.

Prior to the arrest, investigators had worked for a month following a tip-off that large quantities of elephant tusks were being ferried from the Lindi, Mtwara, and Ruvuma regions to Dar es Salaam and were sold to Chinese nationals in the city.

According to a report in the Shanghaiist, throughout the case, the poachers maintained their innocence of the crime. They reportedly claimed they had nothing to do with ivory smuggling and were merely storing the ivory for friends.

However, the investigators in the case, as well as neighbors of the Chinese men who witnessed the search by wildlife officers in the men’s house, testified in the matter. Reportedly, the two men have been in custody since their arrest. The court ordered the confiscation of the ivory haul along with two cars belonging to the poachers.

The two men were sentenced in the Kisutu Resident Magistrate’s Court on Friday for illegal possession of the elephant tusks. Each man received a sentence of 30 years for smuggling ivory along with a further sentence of five years each for bribing police and wildlife department officers.

The Citizen newspaper in Tanzania quoted magistrate Cyprian Mkeha as saying, “Considering the evidence adduced in court and the huge loss that the nation has suffered for the killing of 226 elephants, it is obvious the accused are a real threat to the elephant population.”

Mkeha said that evidence provided by the nine prosecution witnesses proved the offense beyond all reasonable doubts. It was also tabled that there was sufficient reason to believe the two Chinese men were ringleaders and financiers of an elephant-poaching syndicate in Tanzania.

As reported by The Inquisitr, last year Yang Feng Glan, a Chinese woman in her 60s and dubbed the “ivory queen,” was charged with the smuggling of 706 elephant tusks from Tanzania to China worth US$2.5 million. She is in custody awaiting trial.

More recently, The Inquisitr reported in an article that a British helicopter pilot, aiding wildlife authorities, was shot down and killed by elephant poachers in the country.

Poaching crimes have risen recently across sub-Saharan Africa, where well-armed criminal gangs kill both elephants for tusks and rhinos for horns, which are often shipped to various countries in Asia for use in ornaments and medicines.

Reportedly in 2013 Chad had only 500 elephants remaining after 90 percent of the elephant population had been killed in the last decade.