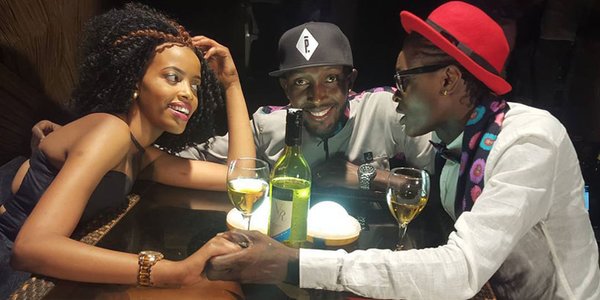 Clearly excited about the collaboration with Jose Chameloene, Deejay Pius told this reporter on Wednesday night, “Agatako official video out now. Please watch and share with everyone. Thanks.”

Deejay Pius‘ new song is already receiving massive airplay around the region, Agatako” loosely translates to “Souvenir” or ‘beautiful decoration’ meant to be kept as a reminder of a special ‘bond of love.’ The song is in Kinyarwanda and the video was officially released in Rwanda over the Wednesday night.

The cinematic music video is very much like a love story movie trailer. Agatako video was shot in Rwanda by video director, Meddy Salleh, over a period of two days at a cost said to be between US $4000 and $5000. In the the duo can be seen rapping and singing about flourishing relationships as scantily clad ladies apply make and dance in revealing lingerie through the rain. Watch it here!

Deejay Pius, 29, has spent 10 years as a DJ and seven as an artiste recently embarked on a solo career after recently split with Innocent Aidan Tumaini aka Tkay with whom he created Two 4 Real in 2009.

Dr Chameloene also used the video release party as an opportunity to celebrate his birthday with his fans in Rwanda.

The musical doctor has been pretty busy these days too! Dodging authorities and promoting the same music video; “Here is the works of Rwanda,Uganda culture and Music combined in this beautiful Zouk Ballard featuring Jose Chameleone and deejay Pius from Rwanda,” he posted on social media.

What do you think about Chamilis’ new music video?