Somalia President Hassan Sheikh Mohamud has assured Somali refugees in Kenya of an orderly repatriation from the refugee camps. The development comes in the wake of the Kenyan government announcing that it would close all refugee camps in the country, estimated to host about 600.000 people of Somali origin.

But President Mohamud, who visited the Dadaab Refugee Camp last week assured the Somali refugees that their government is committed to receiving them back home to participate in the process of reconciliation and state and nation building.

‘The repatriation will be orderly, humane and dignified as per the Tripartite Agreement,’ President Mohamud said before thanking Kenyans for hosting his people for the past 25 years.

Later during a meeting with host President Uhuru Kenyatta, the two appreciated the contribution of African countries including Kenya within the framework of the African Union Mission to Somalia (AMISOM) in stabilizing Somalia. They also commended the cooperation between AMISOM and the Somalia Security Forces in securing a stable environment for state building in line with Somalia’s Vision 2016. 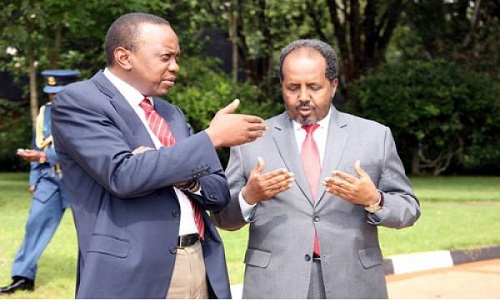 Presidents Kenyatta and Mohamud also called upon the international community, in line with the principles of burden sharing, to support the repatriation process by providing adequate support to the Federal Government of Somalia to receive the returnees.
On bilateral cooperation, the two presidents directed the immediate convening of the Joint Commission for Co-operation to follow up on its implementation particularly on joint border crossing and security, trade and investment, health, education, sports and youth, culture and scientific research and communication.
On regional issues, the two presidents also agreed to consult the Chair of IGAD Assembly of Heads of State and Government on the convening of the IGAD Summit in Mogadishu, while President Kenyatta accepted an invitation to visit Somalia in the near future.