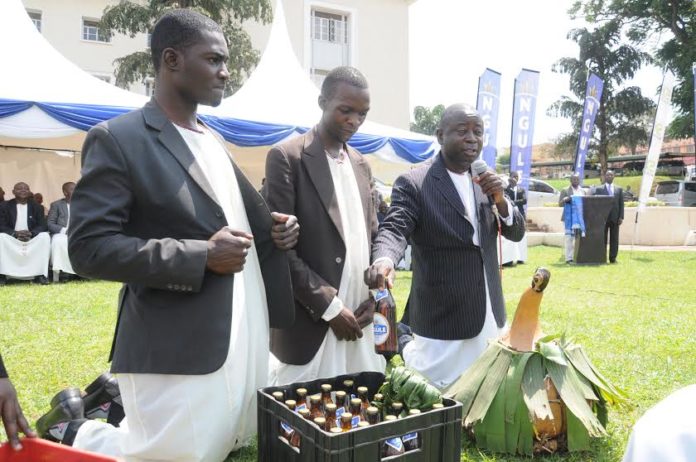 The Buganda Kingdom official beer, Ngule, will be at every Buganda traditional function, the Katikkiro of Buganda, Owekitiibwa Charles Peter Mayiga, has said.

The Prime Minister was presiding over the swearing-in ceremony of the new Executive of the Association of Abo’ogezi B’emikolo at Bulange, Mengo, on Tuesday 14, 2016.

The Abo’ogezi Association is a body that brings together all Buganda Kingdom cultural events spokesmen.

Ngule, which was launched in January 2016, is a kingdom beer produced by Uganda Breweries Limited (UBL) for Majestic Brands – the investment arm of the Buganda Kingdom.

“As our ambassadors, when the bako (in-laws) are asked to bring ekita at kwanjula, I task you to make sure they bring Ngule,” said Mayiga.

“We want to move our people away from consuming illicit brew which is potentially harmful to their health,” he added.

At the event, attended by over 500 Aboogezi, Mr Mayiga emphasized the need to keep the tradition but also modernize it so that the consumers of the brew brought to events are both safe and healthy.

Noah Ssenfuma, a representative of the Aboogezi said Ngule is a beer for celebratory occasions that should be present at every festival. He urged his fellow Boogezi to make sure that the brand is present at all functions they cover and recognized the fact that Ngule is the official kingdom beer.

“On a recent visit to the Uganda Breweries Limited plant in Luzira, I was taken through the production and bottling process our beer goes through. This beer is hygienically produced and is brewed to international standards, just like all other UBL beer brands,” Mayiga said.

Owek. Mayiga further urged farmers within the kingdom to grow cassava and supply it to UBL. Ngule is brewed from cassava, most of which is exclusively sourced from within the Buganda Kingdom.

“This is also part of the Kabaka’s 5 year strategic plan to get the people of Buganda out of poverty. This beer is another way in which we aim to boost household incomes within the kingdom,” Mayiga said.

He added that the kingdom intends to re-invest the monies earned from Ngule into key areas in the kingdom such as health, education and sanitation.

The Katikkiro also urged them to continue supporting other kingdom initiatives and brands. He highlighted the tree planting initiative which has been widely embraced by the kingdom’s subjects. It is now the norm to carry tree seedlings as part of the gifts to kwanjulas. This is part of the Buganda Kingdom’s efforts towards conserving the environment.