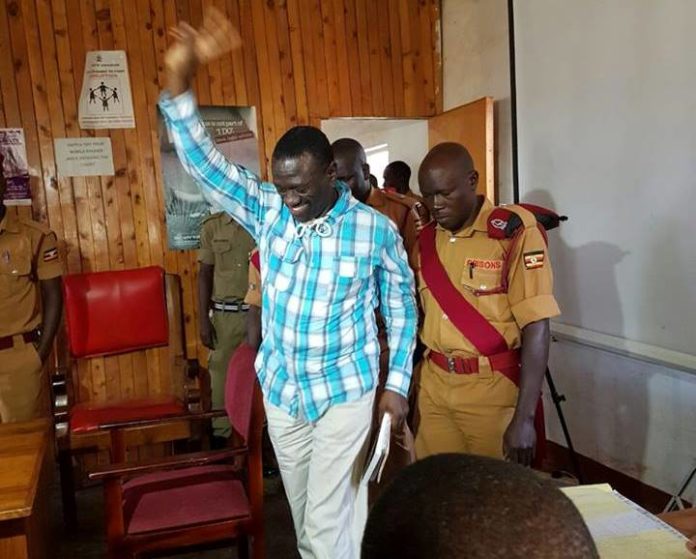 The magistrate’s court instead rejected video footage presented by the state to pin Dr Besigye.

The footage was presented by the first state witness Brain Mark Omito, a Police Officer attached to the evidence gathering unit. The video shows Besigye’s motorcade from Kalerwe to Mulago as proof that the crowd that followed him could jeopardize business in Kampala if he had not been stopped.

But defence lawyers led by Ernest Kalibbala questioned the credibility of the footage on account that it had been edited to 7 minutes and 42 seconds from a record of 1 hour and 20minutes.

Kalibbala asked that the video be withdrawn a plea that was sustained by Grade One Magistrate Egesa.

The case is from an April 5th incident when Besigye was arrested just hours after he left his home and approximately three days after the Inspector General of Police Gen. Kale Kayihura ordered security officials to withdraw from outside residence of the four time challenger of president Yoweri Museveni.

The move came despite assurances by authorities that he was free to attend prayers at his party headquarters Tuesday.

Besigye, who often draws large crowds wherever he travels, had been under house arrest since the presidential poll on February 18.

His arrest came as supporters joined his procession from the outskirts of Kampala and followed him as he made his way into the city.

Besigye was taken to Nagalama police station outside Kampala.  A police spokesperson said he has been charged with participating in an unlawful procession.

Besigye who is currently on remand in Luzira on treason charges was then arrested several times in the run-up to the February 18 polls.  He was placed under house arrest for a month and half after the vote.

President Yoweri Museveni won that poll with 60 percent of the vote.  This is his fifth term in office.  Besiyge placed second with 35 percent.  He said there were irregularities, but his detention prevented him from contesting results in court.