Forty eight companies and individuals that are reportedly seeking to be bailed out by government to the tune of Shs1.8 trillion have been dragged to court.

In a plaint filed through M/S Joel Olweny and Co. Advocates, a private citizen, Moses Musinguzi, is jointly suing the Attorney General, as the government representative, and 40 companies and eight individuals for shs5 billion, to be paid to the consolidated fund, for violating the Constitution. 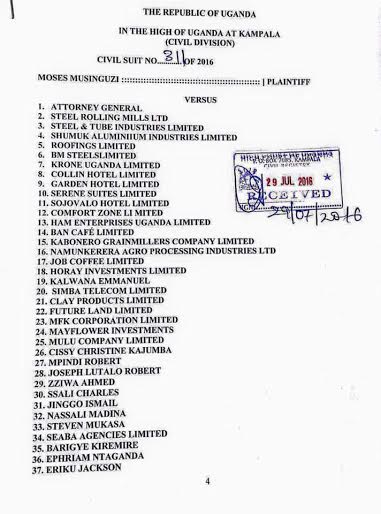 ‘The plaintiff is a male adult Ugandan of sound mind, a citizen of Uganda interested in good governance and respect for rule of law and brings this suit as a public interest litigation matter in enforcement of his fundamental rights and freedoms under article 50 of the Constitution of Uganda,’ his lawyers wrote. 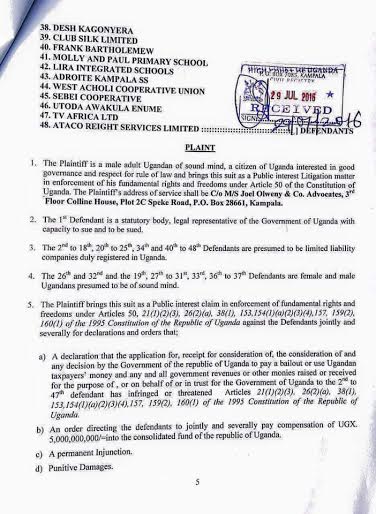 According to the business entities, they are financially distressed due to a number of factors including high interest rates on loans and a slow pace of business.

However, sections of the society are vehemently opposed to the bailout, with arguments that the move is intended to encroach on taxpayers’ money.

And last week, while addressing a press conference, the Democratic Party (DP) said the companies and individuals seeking bailout out had bankrolled the National Resistance Movement (NRM) during the presidential and parliamentary elections and that those claiming distress were simply seeking re-imbursement.

Recently, while addressing Ministers and Permanent Secretaries that were attending a weeklong retreat at the National Leadership Institute (NALI) in Kyankwanzi, President Yoweri Museveni weighed in on the matter and said government would consider bailing out companies that have been involved in carrying out supplies to war-torn South Sudan, and those that are involved in export trade.

Previously, government has bailed out businessman Hassan Basajjabalaba with billions after he claimed his hides and skins business was in distress. At the time the move attracted severe criticism from several quarters, but no one took the bold move like Mr Musinguzi has done.