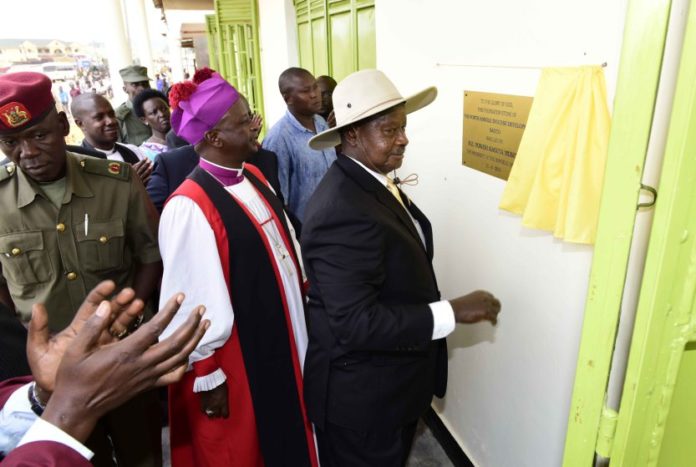 President Yoweri Museveni has commended the people of Rushere in particular and of Kiruhura district at large for engaging in income generation projects.

The event was also used to celebrate the victory of President Museveni and the National Resistance Movement (NRM) during the 2016 elections. President Museveni, who was the guest of honour, commissioned the Diocesan SACCO and milk plant and also laid the foundation stone of the girls’ school

North Ankole Diocese, created in 2003, has a variety of investments worth Shs. 800 million that, among others, include a dairy farm, milk plant, a bee farm, a girls’ school and health insurance.

“I am pleased to note that the people have stopped nomadism, embarked on work and are generating income. I thank God who has enabled them to educate their children,” he said.

He expressed happiness that the people had gathered to thank God for the NRM victory. He said that NRM has built the Lyantonde – Ibanda – Kamwenge – Fort Portal road adding that the facility would go a long way towards promoting development in the area. He further informed the gathering that the NRM Government will build the Kazo – Kyegegwa – Hapuyo road.

President Museveni commended the congregation for their commitment to educating their children in schools near their homes. He, however, cautioned the youth over the dangers of the HIV/AIDS scourge. He called on them to avoid the situation of what he called ‘winning a trophy in AIDS.’ He urged parents and religious leaders to sensitize the youths over the pandemic.

Regarding environment, the President called on the people of Kiruhuura district and the Ankole Sub-Region as a whole, to protect water sources. He made particular reference to River Rwizi which transverses the area but is threatened with drying up because of the harmful activities of the people along its course. He asked them to leave intact the swamps that are water catchment areas for the benefit of the community. He informed them that the Government has made plans to promote irrigation in order to ensure sustainable agricultural production adding that it would also promote work on valley dams to ensure that wananchi are served.

Mr. Museveni said plans are underway to enable wananchi cultivate perennial crops such as coffee, fruits, tea and cocoa. He gave assurances that this would be done through the provision of quality seedlings. He urged wananchi not to worry about incidents of East Coast fever that affects cows because veterinary officials are working to ensure that the threat is contained.

President Museveni thanked the people of the area for establishing a Diocesan SACCO to which he donated Shs.10 million to boost it. He pledged to donate a tractor to facilitate their agricultural venture and that he will assist them to search for an investor to help them tap into the resource of their 670-acre land.

During the thanksgiving service, Shs. 372 million was realized towards the girls’ school building project to which the President had auctioned a cow at Shs.10 million; donated Shs.10 million for the thanksgiving cerebrations and also pledged Shs.200 million for the girls’ school building, out of which he gave cash of Shs.20 million. The President further bought 21 cows at a total of Shs.42 million and donated the cows to Bishop Namanya.

North Ankole Bishop, Rt. Rev. Steven Namanya, saluted President Museveni for his wise leadership and thanked God for the gift of Mr. Museveni. He congratulated him for the general elections’ victory.