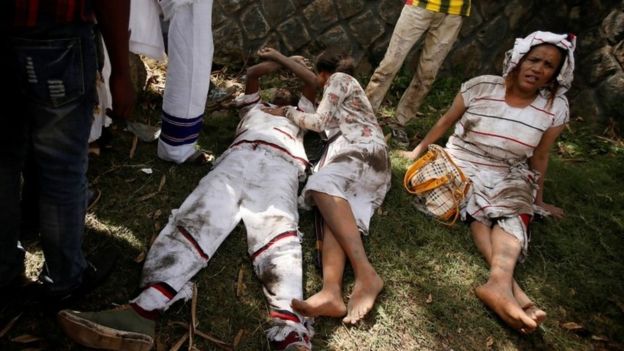 Scores of people are feared dead after police in Ethiopia fired teargas and warning shots to disperse anti-government protesters at a religious festival, triggering a stampede.
The Oromiya regional government, where the event took place, confirmed the death toll at 52. A spokesman blamed “people that prepared to cause trouble”.
Opposition parties said at least 50 people had died at the festival on Sunday and other witnesses put the toll higher.
There have been sporadic protests in Oromiya over the last two years. Last year plans to allocate land surrounding Ethiopia’s capital, Addis Ababa, for development prompted fierce demonstrations from members of Oromo minority, the country’s largest ethnic group. Many of those who would have been displaced by the new scheme were Oromo. The scheme was scrapped in January but protests continued.
Several rights groups including Amnesty International and Human Rights Watch have reported that up to 400 people have been killed in clashes between security forces and protesters, the country’s worst unrest in more than a decade.
The deaths on Sunday occurred in the town of Bishoftu, about 25 miles (40km) south of Addis Ababa. Hundreds of thousands of people had gathered at a sacred lake for the annual Irreecha festival of thanksgiving. Crowds chanting “we need freedom” and “we need justice” prevented community elders, seen as close to the government, from delivering speeches. 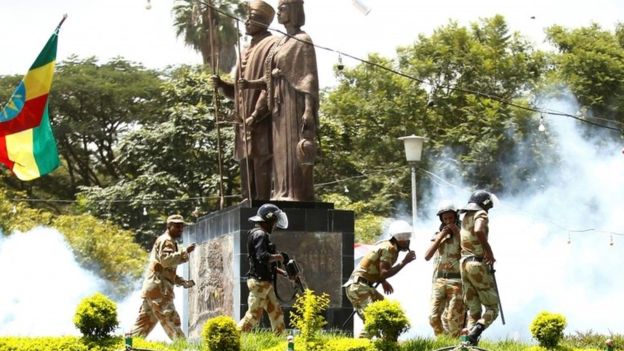 Some protesters reportedly waved the red, green and yellow flag of the Oromo Liberation Front, a rebel group branded a terrorist organisation by the government. According to witnesses, protesters threw stones and bottles and security forces responded with baton charges and then teargas grenades.
The teargas caused panic and at least 50 people fell on top of each other into a deep ditch. Images from the scene showed dozens of men trying to climb out of a trench that appeared to be at least 6 metres (20ft) deep.
Witnesses said they saw people dragging out a dozen or more victims showing no obvious sign of life. Half a dozen people were seen being taken by pickup truck to a hospital, one witness said.app
“As a result of the chaos, lives were lost and several of the injured were taken to hospital,” the government’s communications office said in a statement. “Those responsible will face justice.”
Merera Gudina, chairman of the opposition Oromo Federalist Congress, told Reuters his group had been talking to families of the victims and it was thought at least 50 people were dead. He said the government had tried to use the event to show Oromiya was calm. “But residents still protested,” he said.
The government blames rebel groups and dissidents abroad for stirring up the protests and provoking violence. It dismisses charges that it clamps down on free speech or its opponents.
Oromos and Amharas, another ethnic group, together make up 60% of Ethiopia’s population of 100 million and have become increasingly vocal in rejecting what they see as the disproportionate power wielded by the northern Tigrean minority in government and the security forces.

In parliamentary elections in 2015, opposition parties failed to win a single seat – down from just one in the previous parliament. Opponents accused the government of rigging the vote, a charge government officials dismissed.
Ethiopia, a close ally of the west, has long been one of the world’s poorest nations but has experienced rapid economic growth in the past decade.
In one of the most public recent protests, Olympic athlete Feyisa Lilesa crossed his arms as he finished the marathon at the Rio Games in August, a sign of solidarity with fellow Oromo meant to symbolise being handcuffed by security forces.
The 26-year-old has since sought political asylum in the US, saying he is afraid to go back to his homeland.
In an interview with the Guardian this year, Ethiopia’s Prime Minister, Hailemariam Desalegn, described his country as an island of stability in the troubled Horn of Africa region.
“We have clearly identified why this protest has come about: unemployment and lack of good governance. Building democratic culture will take some time. But we are on the right track. It’s improving,” Desalegn said.
Any sign of unrest is closely watched in Ethiopia, with frequent detentions of alleged dissidents and pressure on the media. Ethiopia is 142nd of 180 in the press freedom index compiled by Reporters Without Borders.