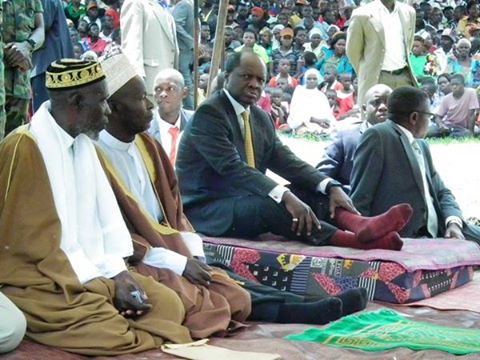 Kabaka of Buganda, Ronald Muwenda Mutebi has lauded all the companies that organized marathon as a way of contributing towards helping people with sickle cell.

Kabaka’s birthday celebrations started a week before with a marathon organized by different stake holders such as Airtel, MAD advertising among others with an aim raising funds for sickle cell patients in the country.

At around 10:am, the king arrived at the main  venue with a group of his followers such as Kabaka Munyango that escorts him wherever he decides to appear before his subjects.

While addressing the kingdom subjects on his 62nd birthday, the kabaka Ronald Muwenda Mutebi said ‘’we are happy for the gift life given to him and his people by God and serving our nation’’ That contribution promoted the heart of togetherness in and outside the country.

A lot of things have been donated to his royal among which is a building that has been constructed at Lubiri High School in Mityana district and renamed his mother, Sarah Nalule. This is not the first building that the kabaka has received from his subjects, on his 61st birthday, he received Masengere building as a gift of his birthday.

He lauded his former minister Dr. Emmanuel Lumu for being royal and compassionate at a time he served Buganda kingdom

He continued that, thanking all the organizers of his birth day among which is the host Lubiri high School, adding that poor schools produce poor students which leads to poor performance in the country, therefore he urged  his people and the government to put in more effort to elevate the standards of education.

After the functions, he was escorted by his subjects to Mengo where he is going to have his dinner from.