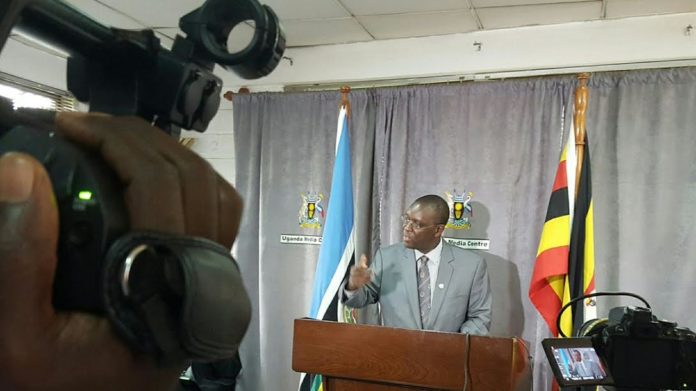 Permanent Secretary the Ministry of Gender Labour and Social Development Pius Bigirimana has promised to monitor all Ugandans who are exported for manual labour through licensed companies.

He revealed that government has licensed 63 exporting companies and that the companies agreed to make a provision beyond the minimum wage, observation of working hours and payments must be made in time.

Due to public outcry about Ugandans who are being torture, mistreated in Saudi Arabia, the government established a liaison office in Saudi Arabia to cater for all Ugandan citizens in that country and in turn called for observation of cultures and practices in the country that you are heading to. He advised whoever suffers calamities in the specific countries to go for rehabilitation before time.

Addressing the media about the progresses of the ministry, Bigirimana pledged that the ministry will be carrying out orientation before their departure .Upon leaving for manual labour through a licensed company, will be issued with a ticket of return.

Bigirimana highlighted that the ministry has accessed 133,000 youth and disbursed Shs75 billion. “It is not free money however revolves from youths to fellow”.

According statistics, the ministry has recovered 65 per cent of the amount of money that was invested in the programme.

He revealed that on Tuesday May 16, 2017 his ministry signed a Memorandum of Understanding with Centenary bank to distribute money to the youtH.

‘’We are going to make sure these programmes for the youth are implemented despite the challenges’’ Bigirimana said.Adding that a team of professionals is in the field to trace out challenges affecting thE programme.