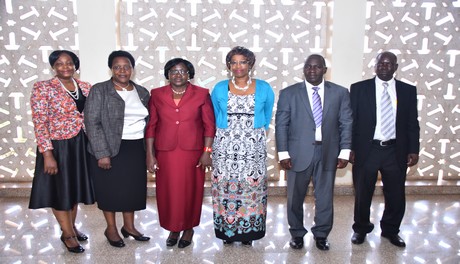 The UNAIDS Country Director Dr Karusa Kiragu, has urged Ugandan legislators to step up the fight against the HIV/AIDS scourge, pointing out that 1,000 new infections are reported in the country every week.

“There is a global drive to eliminate the HIV/AIDS scourge. The world now has the required tools, tests, treatment and technology,” said Dr. Kiragu said, adding that leaders should not lose the opportunities now available to fight the scourge.

New statistics show that the prevalence of HIV among adolescent girls stands at 9.1 percent, compared to the national prevalence rate of 7.3 percent, with the country registering 230 HIV new infections a day.

The Director said that the reported 52,000 new infections every year were worrying and added that Ugandans needed to know their HIV/AIDS status in order to protect themselves better.

Dr. Kiragu lauded Uganda for establishing the AIDS Trust Fund, which she advised, should have its own sustainable funding to keep it running even when donors stop or reduce their financial support.

The Kole District Woman Member of Parliament Judith Alyek said that Parliament has through its committees, contributed in the fight against new infections through oversight, field visits as well as community outreach programmes in their constituencies.

The MP also said that a two percent levy imposed by government on spirits would be deposited in the AIDS Trust Fund.

She also added that there was need to bring men on board in the fight against the scourge.

“We shall continue our engagement with UNAIDS in the fight against HIV/AIDS; and Parliament is also targeting other infections like Tuberculosis,” MP Alyek said.

Parliament Week 2020: Over Shs50m raised for establishment of centre for...

World’s 22 richest men have more than all women in Africa:...