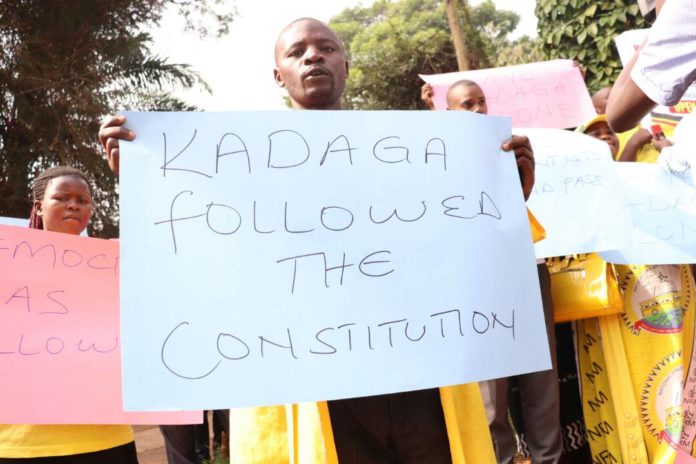 A group of people claiming to be supporters of the Speaker of Parliament Rebecca Kadaga has today stormed Kampala High Court where she was expected to defend herself over allegations of ‘illegally’ suspending six Members of Parliament.

Carrying placards inscribed with words like ‘Leave Kadaga Alone’, ‘Kadaga followed the Constitution’, today’s protesters said the Speaker ably guided the House during the age limit bill, and that the decision to suspend the six MPs ‘was the best of all’.

This is not the first time people claiming to be supporters of public figures dragged to court for alleged breach of the law. In May last year, tens of protesters stormed the Makindye Magistrate’s Court, in an attempt to scuttle a case lodged against the Inspector General of Police (IGP) General Kale Kayihura, who had been accused of the torture of supporters of the former Forum for Democratic Change presidential candidate Dr. Kizza Besigye.

Meanwhile, the Speaker did not show up and was instead represented by lawyer Johnson Natuhwera, as High Court judge Margaret Oumo Oguli dismissed and referred the case to the Constitutional Court for interpretation.

In a ruling delivered by Deputy Court Registrar Joyce Kabagye, Justice Oguli said her court lacked the jurisdiction to handle the case.

But the ruling unsettled the defence team led by Erias Lukwago, who expressed surprise at the ruling saying it was in contravention of the legal procedures and the principles of natural justice.

“I am surprised by Oguli’s ruling; this case had not been heard for the three sittings instead it has been referred to Constitutional Court,” Lukwago said, adding that it was the first time he was experiencing such a decision in the 19 years he has practiced law.

Later, Lukwago said he would meet his clients and the Leader of Opposition to determine the way forward.