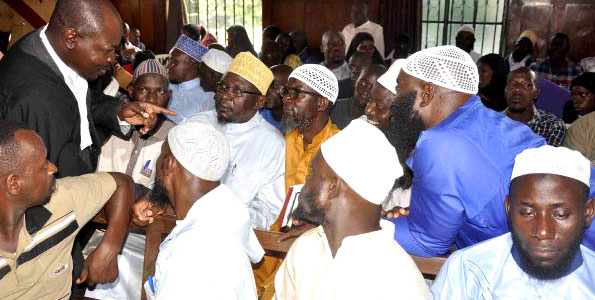 High court Judge Wilson Masalo Musene has adjourned the hearing of treason case against 19 Muslim suspects to February 28, 2018 after the fourth prosecution witness contracted diarrhea.
Appearing before court, the principal state attorney Lino Anguzu informed court that another key witness whose name was withheld, was round court but could not attend session because the witness had diarrhea.
According to counsel Lino, the witness asked for three days for him/her to receive treatment and that prompted the presiding judge to give February 28, 2018 as the next date for hearing.
Before adjourning the matter, justice Musene implored Director of Public Prosecution to always bring two or more witness for prosecution to thrive.
The first key witnesses include the Director of Health Services in the Uganda Police Moses Byaruhanga and medical Clinical officer practicing at Mayfair and Dennis Asiku a clinical officer.
Prosecution alleges that the suspects plotted to overthrow the government by use of arms, between January 2013 and June 2015 in various parts in Uganda and outside including Dubai, Kenya and Tanzania. Prosecution further alleges they expressed the said plot through utterances, training and recruitment of rebels.
The suspects include among others Sheikh Multa Mudde Bukenya who was convicted and sentenced to life imprisonment for killing Muslim clerics in Uganda, Aggrey Amir Kinene, and Hakim Kinene.