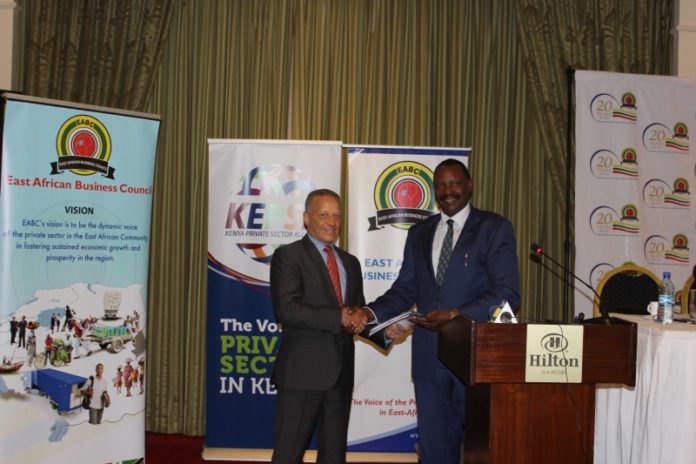 Ugandan Jim Kabeho who has been Chairman of the East African Business Council (EABC) has handed over the office to his successor, Kenyan Nicholas Nesbitt for the period 2018/19.

In his remarks, Kabeho lauded the EABC Secretariat for the good work that has been done in the year under review and congratulated the incoming board of directors, urging them to continue the ongoing initiatives of the EAC Integration process.

Kabeho pledged to support his successor and the new team as they seek solutions to the challenges that face the private sector in the region.
In his acceptance speech, Nesbitt reiterated the need to increase competitiveness of East African companies and SMEs to compete at continental as well as international level.

“Let’s focus on competitiveness of our businesses to sell our goods at regional, continental, and international scale,” he said.
He urged for close collaboration with the governments of the EAC Partners States and called for the government to improve the business environment support the operations of the Private Sector to thrive.

The new chair also called for improvement of technological infrastructure to fast track free movement of goods and services in the region.
He further appreciated efforts by the former chair Mr. Jim Kabeho in steering the work done in the year 2017 together with the Executive Committee.

“As the Private Sector our interest should be one East Africa and not our country,” he said, calling for the strengthened private sector advocacy efforts at regional level.

The (AGM is the supreme policy making organ of the EABC. The AGM meets once a year to elect the Executive Committee headed by the Chairperson, receive annual report on the initiatives undertaken by the Secretariat and give overall direction to the Secretariat in line with the Strategic Plan and interests of the business community in East Africa.

The EABC Board of Directors consists of 22 members, headed by a Chairperson, elected from the Partner States on an annual rotational basis. Each country nominates four Members to the Executive Committee.
During the 19th EABC Annual General Meeting, EABC also honored outgoing board directors for their distinguished service to the council.