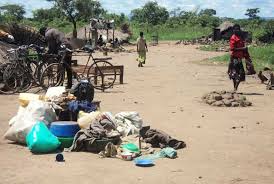 The residents say that these persons always come with government soldiers to threaten their lives in the community ordering them demolish their houses and shift away from the 15, 000 hectres land from Ayego Village to Koch goma Road.

The residents claim that at least two different persons are personally claiming that the land belongs to them yet villagers have been in the area for decades.

Irene Alanyo a resident in the area says the tension is between the two rich persons Abe and Apia where Apia wants to take personal control over land belonging to clan members whereas Abe also wants to chase people because he is rich and want also to take over the land
Agness Obye says they are at risk because even when the axing fire woods in their homes for cooking, soldiers always ask where they collected the wood from.

Alfred Kibwota, secretary to the chairperson Kalang Village revealed to Eagle Online “Those people came to settle in the area in 1975 refugees during Amin’s time and found us already in the area but now they are claiming for land ownership by threatening people’s lives”. She said.

Justine Odong the local council one chairperson Lalur Okun village says they are scared and facing live threats and they could hardly sleep at night since all activity they are conducting in the village are being monitored.

“Over 2000 people of Lalur Okun are currently leaving on their toes due to the threats the community is receiving in their lives from some rich personalities who wants to own lands our village” .