Dfcu bank has again been thrown in the eye of the storm after it issued a notice on the disposal of bank OFFICE assets that it irregularly acquired from Crane Bank even after a Court ruling that ruled that Crane Bank’s properties belong to Meera Investments and thus cannot be sold by Dfcu.

Court on August 26, 2019 in the Miscellaneous Application 320 of 2019 ruled that Dfcu’s takeover of the properties that were housing Crane Bank was illegal because the properties belonged to Meera Investments, and not Crane Bak in receivership as was being claimed by Dfcu.

Indeed, following the ruling, Dfcu bank relented and vacated properties and buildings that had been owned by Crane Bank before it was acquired in 2017.

Stunned by the court ruling, Bank of Uganda(BoU) also acknowledged that Dfcu Bank had opted out of the acquisition of the properties held under a Ruparelia Group subsidiary – Meera Limited and can therefore, not auction them.

In its 2019 annual report, the central bank indicated that Dfcu will return to BoU certificates of title for Meera Investments Limited properties and requires BoU to pay to dfcu the net book value of the properties recorded in the assets and inventory compilation report as at October 20, 2016. 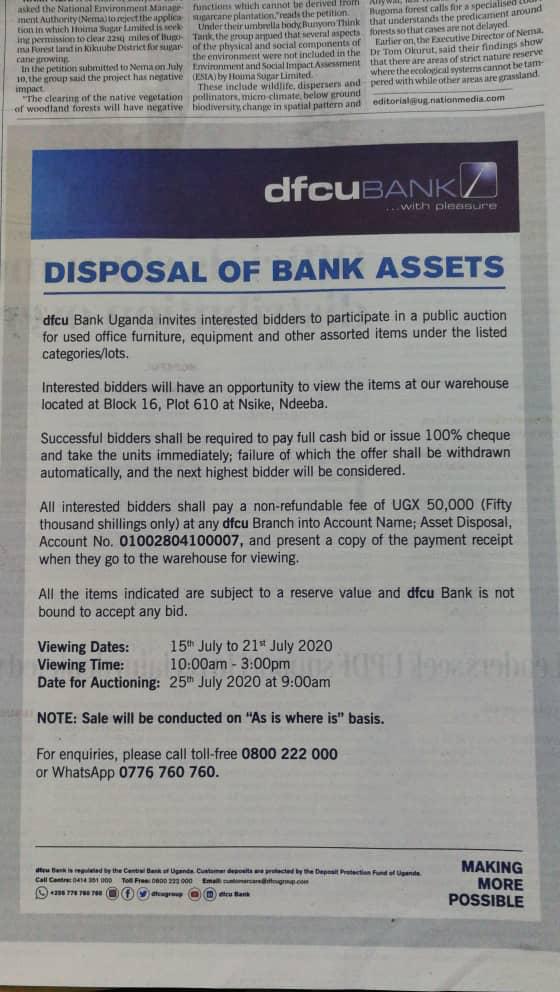 “… Dfcu in a letter dated September 12, 2019 communicated … its decision to exercise its option to rescind its interest in purchasing the 48 properties pursuant to clause 8.7 of the agreement,” read the BoU report.
Though it remains unclear why Dfcu bank has now turned around to make attempts to auction Crane Bank furniture, in 2019, it emerged that Dfcu bank had been misled by Law firm Ssebalu & Lule Advocates to illegally transfer title properties into its name yet the properties belong to Meera Investments Limited even though it had leased them to Crane Bank Limited.

In the notice that was published in the print media, Dfcu claimed that the viewing dates will be from 15th July-21st July, with bidders required to pay a non-refundable fee of Shs50,000.

“Dfcu bank Uganda invites interested bidders to participate in public auction for used furniture, equipment and other assorted items under the listed categories/lots. Successful bidders shall be required to pay a full cash bid or issue 100 per cent cheque and take the units immediately, failure of which shall be withdrawn automatically and the next highest bidder will be considered, “reads the notice.