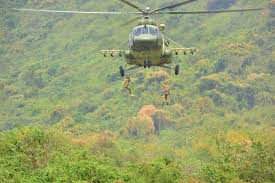 Uganda Peoples’ Defence Forces Mountain Brigade Commander Maj.Gen. Kayanja Muhanga has started overseeing the setting up of a military base in Beni North Kiva for troops ahead of their deployment against Allied Democratic Forces (ADF).

The Ugandan and Congo armies are setting up an operations centre in the east of Democratic Republic of Congo for a joint offensive against Islamist.

ADF has been terrorizing civilians in the restive part of DRC and in often cases killing fishermen on Lake Albert on both sides of the two countries. DRC President Felix Tshisekedi is reported to have held talks with his Ugandan counterpart Yoweri Museveni on his recent trip to Kampala during the swearing in ceremony of President Museveni.

The preparation for the offensive comes at the time when both countries are undertaking a joint venture in infrastructural development.